Val at Babalu is about ready to uncork the champagne and light up a nice hearty stogy as he thinks that the Cuban communistas are about to announce that Fidel has had his one way ticket to hell punched.

This doesn't appear to be the usual weekly Fidel dead rumors.

My cellphone has not stopped ringing for the past ten minutes. Various sources inform that an announcement will come within the next few minutes from the Cuban government on Cuban TV and media. Stay tuned and we'll see if we've been manipulated once again or if today is the birth date of Cuba's liberty.

First, South Florida Law Enforcement is on alert. An EOC (Emergency Operations Center) has been set-up and manned somewhere in Homestead.

Im also told Local and State government agencies have food, bottled water, and other necessities - valued in the millions - stored and/or staged in Homestead at or near the EOC.

I am presently verifying whether Coast Guard and DHS and Border Patrol agencies are on high alert. (Verified 01445)

Local News stations are abuzz, mostly on reports very much like the above, with massive law enforcemnt mobilizations throughout Dade county.

If this does indeed pan out, it is a great day for the Cuban community, though the long term effects for those Cubans living under the crushing heel of the Communists in Cuba isn't going to change all that much because the Communists have been handling the day to day matters for nearly a year without Fidel's active involvment.

Cuba's foreign minister said that rumors of Fidel's waning health are untrue, in a news report from several hours ago.

There's also the possibility that the Communists are playing on everyone's hopes that Castro is indeed dead, only to trot him out for all the world to see.

Preferably, I like to see the Weekend at Bernie's version, but because the Cuban government controls the media, they are calling the shots and solid information is difficult to come by.

Hot Air has more, and also relates some of the same concerns I have.

UPDATE:
The following photo is bogus as I discovered when I first posted it, but it is one that many Cubans and freedom loving folks would love to have come to pass. Castro's evil rule over Cuba has doomed generations of Cubans to live under the heel of a totalitarian dictator. 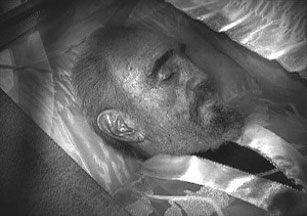