As readers of this blog know I have been participating in Project 2,996, a tribute to the 2,996 innocent victims of 9/11, where bloggers eulogize each victim.  Today, I am changing the rules a bit.  I will not be writing a tribute to one of the victims who died that fateful day, but rather, a tribute to the first responders who have died in the last 18 years because of injuries they suffered while at ground zero.  Please also view my previous tributes to Firefighter Thomas M. Butler, Capt. Daniel J. Brethel, Pamela Chu, Donald H. Gregory, Steven Harris Russin, Lt. Col. Jerry Don Dickerson Jr., Mary Lenz Wieman, Mark Francis Broderick, Capt. Patrick J, Brown, Hagay Shefi, Alison Marie Wildman, Daniel Thomas Afflitto, and Donna Bernaerts-Kearns, as they deserve to be remembered today too.

On 9/11, thousands of first responders rushed to the Twin Towers.  As people were running out, they were running in.  Many didn't make it out and are listed as one of the 2,996 innocent victims of that day.  However, many of these first responders worked on the pile for the weeks and months to come.  From the initial search and rescue efforts to fighting the fire that lasted for months to remove the debris and rubble from the pile, thousands of firefighters, policemen, and EMS worked days and nights in conditions that no one was prepared for.  I remember the smell of that smoke. The smell lasted for months.  It hung over lower Manhattan like a cloud.  The smell even extended across the river and into Brooklyn and parts of New Jersey.  Anyone who smelled it, who saw the smoke, knew, instinctively, that the air was not right.  Something was wrong with the air that was being breathed by all of us.

In our society, we have a social contract with first responders.  You risk your lives for us, and we are supposed to support you.  Support you with giving you the best training, the best equipment, the best information.  And if you fall in the line fo duty, we are supposed to take care of your family.  On 9/11 and the days since, we have broken that contract with our first responders.

First, on 9/11 and the immediate days that followed, our first responders were not even provided proper equipment.  I remember news reports that many of those fighting the fire, or searching the pile, or removing debris, did not have proper respiration equipment.  They did not have proper equipment to keep them safe! While we may not have been prepared on that day, there was no excuse for that failure to last for several weeks.

Second, the government lied to them and to all of us!  The government told us the air was safe. Christy Todd Whitman assured all of us that the air around the WTC was safe and not toxic.  That has been proven false.  I remember as the New York City Law Department was preparing to move back to our offices one block from the WTC, City and the Feds brought in experts to tell us how safe the air was to breathe.  That there was nothing to worry about and there never was.  More absolute lies.

Third, when these brave first responders got sick because of the work they did for us and because of the first two failures of our government, it took nearly 18 years for Congress to permanently pass a victims compensation fund so that we can in some way try to fulfill our obligations to them?  Congress did it really take more than a decade of hearings,  the harsh words of a comedian, and a parade of the dying to finally bring you to your senses?  Shame on those like Rand Paul who voted to stop the passage of the Victims Compensation Fund.  Such politics should never have been allowed to enter this discussion.

Recently, a memorial to the First Responders who have dies since 9/11 has been installed at the World Trade Center Memorial.  The six granite slabs are known as the 9/11 Memorial Glade, are not inscribed with names, like the black granite that surrounds the Memorial pools because the victims that this memorial is paying tribute to is not set in stone.  It is estimated that the number of first responders who will die because due to some illness related to 9/11 exposure will exceed the number of first responders who died on that day.

As a society, we must remember our social contract with our first responders. We cannot fail them like this and expect them to protect us when we need them. 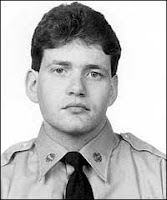 Firefighter Thomas M. Butler was a member of FDNY Squad 1.  Tom's life was dedicated to service.  A 12 year veteran of the FDNY, Thomas was also a former NYPD Officer and a member of the US Navy Reserve, assigned to the Mobile Inshore Undersea Warfare Unit.  He also served as the bay constable in Smithtown‚ N.Y.

As Tom's wife wrote in 2006, "Everyday was important to him and he lived it like it was his last."  His laid back attitude was epitomized by him constantly reminding his family and friends to "Don't sweat the small stuff!".

Tom and Martha had three children, Kelly, 4, Shawn 6 and Patrick 8 months.  On September 9, Patrick and Martha christened Patrick.  Tom, true to his fun-loving nature, wanted a big party.  Martha protested.  Tom won out.  Tom bought a new suit just for the occasion. This turned out to be the last time many of their family and friends saw Tom.  One could hardly imagine a better, more tributing farewell to someone like Tom, than a large family party.

As I write this, my family is planning a Bat Mitzvah for our daughter.  Like Tom, I will be planning a big party for her, and yes, I will be buying a new suit as well.

I have eulogized several firefighters over the course of my participation in Project 2,996.  I think it is important to remember these brave heroes.  As everyone wanted out of those towers, these men and women ran in, with the sole purpose to protect us.  Yet, we are letting them down.  The statistics are well known.  On 9/11, 343 firefighters (including a chaplain and two paramedics) of the New York City Fire Department (FDNY); 37 police officers of the Port Authority of New York and New Jersey Police Department (PAPD); 23 police officers of the New York City Police Department (NYPD);8 emergency medical technicians and paramedics from private emergency medical services and
1 Patrolman from the New York Fire Patrol all died.  Yet the FDNY and NYPD keep adding names to the list of fallen heroes.  Since 9/11, more than 150 firefighters have died of cancers caused from their time at the site.  Just his year, more than 500 NYPD and FDNY officers were diagnosed with new cancers.  This is unacceptable.  The fact that Congress took so long to pass the Zadroga Act is disgusting.  The fact that they let it lapse in 2015 is despicable.  That they reinstated it for 75 years is at least promising.  Why it is not permanent, is beyond explanation.
Posted by Legalbgl at 9/11/2018 01:01:00 PM 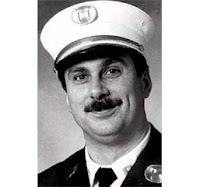 FDNY Captain Daniel J. Brethel, of Ladder 24, was living his dreams.  He was a firefighter.  Something he had always wanted to be growing up on East Meadow, Long Island.  His brother remembers him as a 4 year old with a red firefighter hat and playing with firetrucks on Christmas Morning,  He would listen to his emergency scanner and often beat firetrucks to the scene on his bicycle.  At age 18, Daniel joined the East Meadow Fire department as a volunteer. At age 21, he joined the FDNY and asked to be placed in the City's busiest area, the South Bronx.  It was said that he had two families:  his wife and daughters who where his life, and his FDNY family.

Capt. Brethel was supposed to be finishing his shift on September 11.  But like the hero firefighter he was, he accompanied his ladder company to the World Trade Center that day.  It is believed that Capt. Brethel died while trying to save a fellow firefighter by pulling him under a firetruck.  They were both crushed.  That sense of sacrifice was not unusual for Capt. BREthel, who earlier in his career was severely burned on his neck and ears after taking off his helmet to save a fellow firefighter until medical personal arrived.

Usually I chose the person I eulogise randomly, from a list maintained by the Project 2,996 website.  A few times I have selected  a name that I wanted to remember, such as Steven Russin, who lived on my street, and for whom the Town of Marlboro named my street for (much like the town of East Meadow did for Capt. Brethel.  However, this time I purposely picked a firefighter to remember.  New York's Fire Department lost 349 members on 9/11  An additional 159 have died since from 9/11 cancers, including 32 members who were recently added to the Fire Department Memorial.  It is for this reason that we need to make the Zydroga Act permanent.  We need to expand it to all persons who were at, near and around Ground Zero on that day, and the following days,weeks and months.  Our firefighters sacrificed their lives, and those that survived are still sacrificing their lives without proper medical treatment.

I have helped victims file their claims with the victims compensation fund.  However, many more have not filed, and many more do not know that they have become eligible to file for health care and health services, because the laws have changed, and more cancers and other diseases have been added.  Please, if you or someone you know was there, or around the site, please file.  There are bar associations and pro bono clinics that will help you if you can't do it yourself.
Posted by Legalbgl at 9/11/2017 11:00:00 AM