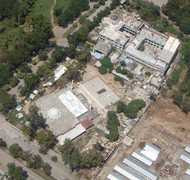 The assault on the Lal Masjid compound began yesterday and reports continue to come in on what has happened. The Times reports that 50 militants were killed thus far. Eight soldiers were also killed.

Commandos stormed the sprawling mosque compound before dawn, and 10 hours later were still trying to root out the well-armed defenders said to be holding a number of hostages.

Khalid Pervez, the city's top administrator, said as many as 50 women were the first to be freed by the militants and had emerged from the complex following the escape of 26 children.

Mohammed Khalid Jamil, a reporter for the local Aaj television network, was among journalists who said they saw dozens of women and girls walking on a road away from the mosque. They were wearing burqas, he said.

A military official who demanded anonymity because he was not authorized to speak to the press, said the women included the wife and daughter of Abdul Aziz, the former head of the mosque who was arrested while trying to flee the complex last week.

The numbers involved thus far do not appear to jibe with what prior reports had indicated. As I've noted over the past few days, reports indicated anywhere from about 100 to nearly 1,000 people in the compound, and an interdeterminate number of militants, terrorists, and jihadis among them. It wasn't clear how many were there willingly and how many were being kept against their will. Even now, we don't know what is really going on as the Pakistani government has kept the journalists at arms' length from the scene. CNN reports that there are about 300 hostages still inside the compound along with 40 to 60 hardcore Islamists, though they aren't even sure of that:

Ghazi claimed more than 300 people have been killed since Tuesday, but an interior ministry spokesman said the ministry completely rejects that claim.

The violence began Tuesday when about 150 militant Islamic students attacked a police checkpoint close to the mosque. Street clashes quickly erupted, with police firing tear gas at the students and the students fighting back with guns and sticks. They then took refuge in the mosque and an adjoining women's seminary, which the troops subsequently surrounded.

More than 1,200 people, mainly students from the mosque's two Islamic schools, have already fled the compound, but officials don't know exactly how many remain.

Ghazi has said there are 1,900 still in the compound. Meanwhile his brother, Maulana Abdul Aziz, said there are only about 850 inside. Other intelligence sources have told CNN that there are about 800 to 900.

Aziz, the top cleric at the Red Mosque, was captured Wednesday while trying to slip out of the mosque disguised in a burqa -- the head-to-toe covering worn by some Muslim women.

The conflict between the Islamists inside the mosque and the government appears to have spread as supporters of the Islamists in the Lal Masjid have blocked the Silk Road and have taken up arms:

'Dozens of armed men have taken positions on the mountains along the Silk Route near Batagram, while hundreds of students from Islamic seminary have blocked the highway,' police assistant sub-inspector Attiq-ur-Rehman said.

He said the students were enraged over several deaths in the military attack on the mosque in Islamabad to end a week-long standoff, which began when student zealots attacked a police post last Tuesday.

Lal Masjid militants have received some support from extremist groups in the country, although public sentiment in general remained against them.

Around 20,000 tribesmen, many armed with rocket launchers and automatic weapons in the tribal Bajaur region bordering Afghanistan, protested against the siege of the mosque on Monday, burning effigies of President Musharraf.

Several leaders of local Taliban militia also joined the rally, where speakers warned they would declare jihad on the government if it continued the siege on the mosque.

All Things Pakistan continues to track the unfolding situation.

UPDATE:
I am rather curious why this story isn't bigger news considering that it involves a possible mass casualty event, hundreds (or thousands) of hostages, Islamists, terrorists, jihadis, and could spawn violence throughout Pakistan. You'd think the geopolitical ramifications of this would be lead news in various outlets, but it seems that other news is more pressing.

UPDATE:
Here's an eyewitness account from a hospital that has views of the mosque compound.

All 700 beds were cleared in 20 minutes. We only left some of the patients with heavy complications. We've been on red alert since then and we've been treating injured people for days.

We started receiving casualties since Tuesday, the first day. Our first casualty was a ranger officer, he was shot dead. Most of the others were girls suffering from suffocation or from tear gas. We had around 150 to 200 only on the first day only. They were all fine in the end.

We have so far received 26 gunshot victims, but of course this is only in our hospital and the real number is much higher.

Yesterday I was on night duty. I was having a quick nap, when I was woken up at 0420 (2320 BST) by a huge blast. The windows were trembling.

Since then there's been non-stop firing of heavy machine guns. You can tell by the sound that there's been very heavy fighting. We also hear rocket-propelled grenades. Since this morning they have been using heavy equipment.

Military casualties are being taken to a military hospital 30km away, while other hospitals are taking other casualties.

Islamist leader Abdul Rashid Ghazi, Aziz's brother, was among those killed in the fighting today. It's not clear how he died. Aziz was captured trying to escape the mosque wearing a burqa.

UPDATE:
Security forces are taking their time going through the compound because of booby traps, but the number of those killed is sure to rise much higher:

Army spokesman General Waheed Arshad said: "Militants are taking positions in almost every room, they're fighting from room-to-room, they have positions in the basement."

"There are women and children who are in the complex and we are taking a step-by-step approach to ensure there's no collateral damage unnecessarily," he added.

A witness said those inside the compound were under "massive bombing and gunfire. This is indiscriminate killing ... There are dead bodies everywhere".

At this point, there's no way to know whether those killed are innocents or the thugs holding the hostages.

UPDATE:
The Pakistani security forces had been considering several different methods of breaching and entering the Lal masjid complex. Apparently, they chose not to use nerve agents to incapacitate those inside. Still no updates that can be verified as to casualties involved, but the Times reports the following:

Today, a military spokesman said that after 10 hours of fighting, 8 security forces and roughly 50 presumed militants were dead.

Roughly two dozen children, whom the army said were being held hostage, escaped.

Another 29 troops and special forces were injured, the military spokesman, Maj. Gen. Waheed Arshad, told reporters at a press briefing near the Lal Masjid, or Red Mosque. The spokesman said 50 men and 27 women had been captured, including 13 who were wounded in the battles.

Among them were the wife and daughter of one of the main leaders of the mosque.

I suspect the toll is much higher than that, as literally hundreds remain unaccounted for if the earlier figures were accurate as to how many were inside the complex.

UPDATE:
Bill Roggio is reporting over 100 dead in the Lal Masjid storming by Pakistani security forces.

The Pakistani government confirmed Ghazi was killed in the fighting, however his body has not been recovered. "He was spotted in the basement and asked to come out. He came out with four or five militants who kept on firing at security forces," said Brigadier Javed Cheema, a spokesman for the Inter Services Public Relation branch. "The troops responded and in the crossfire he was killed ... There are still certain areas to be cleared. The body is in the compound. The other militants were also killed in the fighting."

Ghazi's wife and daughter were captured alive in the mosque, along with 27 women. At least 27 children and emerged from the fighting unharmed. Another 50 students of the mosque have been captured.

Commandos of the Special Service Group, backed by the elite 111 Brigade of the Pakistani Army, the Pakistani Rangers and the Islamabad police launched the final assault on the Red mosque after negotiations broke down late Monday evening. Eight members of the security forces have been killed in the fighting so far, including a captain.


UPDATE:
The die is cast. Musharraf is siding with the West:

Military force was the only way to end the standoff at the mosque, which was a ``hub of terrorist activity,'' the official Associated Press of Pakistan cited him as saying late yesterday.

``Let us resolve that we shall rid Pakistan of all forms of extremism,'' Aziz said, adding the militants brought a bad name to Islam.

The mosque siege has increased pressure on President Pervez Musharraf, who is criticized by Islamic parties in the world's second largest Muslim nation for supporting the U.S.-led campaign against terrorism. Pakistani military action against Taliban and al-Qaeda gunmen in tribal areas bordering Afghanistan since 2003 has sparked protests against his government.

The Times of India notes that there are clerics who justify the storming of the mosque, but others worry that it will only strengthen the jihadis.

Expect quite a bit of rumors and conspiracies to swirl around the storming and how the government acted through the crisis. Some will inevitably point fingers at US assistance, though that is denied. Some think Ghazi was murdered.


Others blogging the siege and subsequent elimination of the militants at the mosque: Hot Air, Jihad Watch, Global Voices, TMQ2, Ali Eteraz, and Ace.
Posted by lawhawk at 7/10/2007 09:25:00 AM