Threatening the World With Bombs, and Its Own Collapse

North Korea informed China that it intends future nuclear tests. That's got to be comforting to the Chinese. Watching their client basically do whatever it wants, with destabilizing consequences and increasing the threats to China directly as a result of North Korea's enemies ratcheting up their own military preparedness, should not sit well with China's leadership, though as
Austin Bay notes with some irony, North Korea is essentially threatening its neighbors and the world with its own destruction. Kim is a megalomaniac, but a paranoid and calculating one who has done so quite badly. He's pissed off his key benefactor, the Chinese, who has lost face in the whole mess.

That's not a good thing in a culture where saving face is a big deal. Yet, the Chinese and South Koreans want to tread lightly because they don't want to deal with the basket case on their border.

North Korea put on a grand show in the theaterical stylings of Nazi Germany or the old Soviet Union last night to 'celebrate' the 80th anniversary of the Kim il Jung's regime. 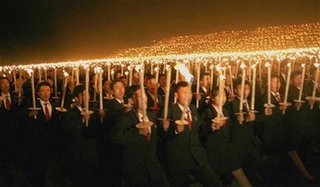 Diane Sawyer continues to report from North Korea, and I have a few questions for her: Is she being censored and/or required to have her broadcasts/reports cleared by the North Koreans before publication/release?

She had noted that cellphones and other wireless equipment was confiscated on entry to North Korea. Is there any cellphone service in the country to speak of? It would benefit the listeners to know that the North Korean government restricts access to all information - which is why few if any know about the rest of the world, let alone what is going on in Hollywood or the United States. They've been fed nothing but the official government line for decades with no alternative sources for that information.

Meanwhile, George Soros and Jimmy Carter blame Bush for the crisis in North Korea. Surely Carter must have amnesia as it was his Agreed Framework that was sold to the Clinton Administration as the way to solve the mess, that led us down the primrose path to where we sit today. The Framework Carter negotiated lacked any verification requirements and penalties for failing to adhere to the agreement. Those failures were exploited by the North Koreans, who went ahead with their nuclear weapons program despite Carter's supposed diplomatic solution.

Soros finds fault with everything the Bush Administration does, so this is no surprise either.

UPDATE:
North Korea says that they want to conduct three more tests. That number is sure to get the experts wondering about just how much nuclear weapons material they have available.