*** This post will remain on the top of the page. Scroll down for other coverage. ***

It's pretty hard to believe that eight years have passed since the deadly 9/11 attacks, in which nearly 3,000 people were murdered by 19 al Qaeda terrorists who hijacked four airliners with the intent to crash them into the Twin Towers in New York City, the Pentagon, and either the White House or Capitol Building in Washington, DC.

The vivid memories of the attacks have faded, and have instead been replaced with asinine ad campaigns for the WWF.

Local television networks are contemplating the extent of coverage of the memorial service at Ground Zero, which will include the reading of the names of all those murdered at the Twin Towers.

On the morning of the 9/11 anniversary, it's expected all the local stations will once again go wall-to-wall with coverage of the name-reading ceremony at Ground Zero.

They'll do as they have for the previous seven anniversaries, tossing out commercials and carrying the coverage until the last victim's name is read.

However, there's a growing reluctance to do so, one partly driven by money.

"This is crazy," said one station insider. "Nobody wants to be the first to pull out."

From a moral standpoint, station officials know well that airing the ceremony is the right thing to do. The ceremony is New York, and it has been an emotional event each time before.

They eventually will stop covering this, although it is only two years until the 10th anniversary of the attacks, and the nation's collective memories will fade even further. The problem is that many are still living with the effects of the attacks, particularly in the New York metro area, and Jay-Z has responded with a benefit concert (and whose tickets were promptly scalped for up to $3,000 when face tickets started at $54.50). Proceeds from ticket and concert merchandise sales will go to the New York Police and Fire Widows' and Children's Benefit Fund.

The tragic circumstances of the aftermath is continuing to take lives. Reports indicate that the number of people who have died as a result of their exposure to Ground Zero has increased. Moreover, several responders have committed suicide.

More than 800 World Trade Center rescue and recovery workers have died since 9/11 -- and cancer has killed at least 270 of those heroes, new data show.

State researchers have tallied 817 deaths of workers and volunteers who toiled at toxic Ground Zero or the Fresh Kills landfill, where rubble was sifted.

Benny Gordon will be racing on September 11 in Virginia in a NASCAR event in a car adorned with 9/11 themed logos to raise awareness for the fundraising efforts for the National 9/11 Museum and Memorial at Ground Zero.

It is interesting to see the difference that a year of construction makes at Ground Zero. This is a photo taken of the Freedom Tower from across West Street at the Vesey Street overpass last year: 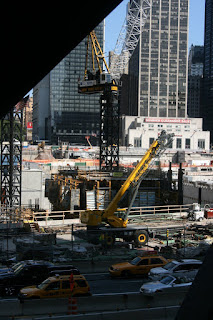 While much of the site is still below the level of the streets surrounding the 16 acres, tower cranes are erecting steel and concrete for 1WTC, the Freedom Tower, and 4WTC on the opposite corner. The memorial and museum are underway (new renderings of the memorial and museum pavilions were released September 10 and picked up by Curbed), although construction deadlines are in doubt whether they will be completed in time for the 10th anniversary of the attacks (the museum is scheduled to open in 2012 and the memorial should at least be partially open by September 11, 2011).

Here's a photo taken from nearly the same vantage point just over a week ago: 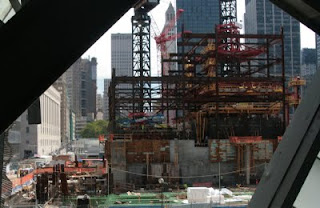 Meanwhile, the cornerstone that was dedicated in 2004 is back at the shop where it was originally fabricated and no one knows what will become of it. In the meantime, it will be placed in a garden at the fabrication facility in Hauppaugue.

Still, the work on the Freedom Tower is a tangible sign of progress, which stands in stark contrast to the lack of visible work on the former Deutsche Bank building and Fiterman Hall. Fiterman Hall is finally being deconstructed, and it's likely that the Deutsche Bank building will follow. Both should have been deconstructed long ago, but the City, State, and public authorities responsible for the sites failed miserably to do what had to be done.

It's only been in the last few weeks that Larry Silverstein gained control over the site for 2WTC and 3WTC, and there's no timetable for when those projects will be completed because there's some effort underway to build the towers as nothing more than stumps that will be finished when the business climate improves. I think that's a terribly shortsighted mistake, and it means that construction in and around Ground Zero will persist for decades to come.

The business climate and the financial market meltdown has meant that demand for office space has declined, but it will eventually come back, and Class A space will be in high demand at some point. In other words, top quality office space is always in demand, and at favorable rates, it will draw businesses to consider working in Lower Manhattan. Turning Ground Zero into a perpetual work zone is a guarantee that those businesses wont come, because they wont want the hassle of working in such an environment.

Yet, local politicians aren't making much of an issue of Ground Zero redevelopment during the current election season. It's not even an issue, despite the fact that we're talking about $10 billion in redevelopment ongoing in and around the site. Redevelopment has become an afterthought, and no one in government has taken it upon themselves to stand guard and make sure that development takes place. Instead, we get a muddled mess and resigned indifference.

It's hoped that the 9/11 memorial will be finished in time for the 10th anniversary, but other memorials have been completed around the region, including one on Staten Island.

This is a closeup of the Staten Island 9/11 Memorial, which sits across from Lower Manhattan. The defining feature of this memorial is that not only are the names and ages of those murdered in the attacks provided, but each person's silhouette was carved into their stone marker. It's a very personal touch, and a powerful one at that. Family and friends have left photos and other personal effects from time to time.

There are memorials all around the nation, yet none is more powerful than the absence of the Twin Towers and the tribute of light that shines from near ground Zero in a silent testimony to those murdered on 9/11.

UPDATE:
Others carrying remembrances and commemorating 9/11: Don Surber, Lorie Byrd, Ed Morrissey, The Anchoress, Sister Toldjah, Michelle Malkin, and more will be posted as I get a chance.

UPDATE:
Today's commemorations in New York City are taking place under gloomy conditions with heavy rain and strong winds, which is quite unlike the startling beautiful morning immediately prior to the first of two planes to crash into the WTC.

Yet, there are still a significant portion of the US population who think that the US government was either behind the attacks, or knew of the attacks and did nothing to stop them. Just as bad is the view across the Islamic world, where many simultaneously believe that someone else besides Muslims were behind the attacks (Jews/Israel among the top choices), and cheer that al Qaeda carried out the attacks, despite all the evidence and the fact that al Qaeda has repeatedly taken credit for the heinous attacks.

UPDATE:
The New York Times looks back on the fearful times that immediately followed the 9/11 attacks, and how many people thought that life would never be the same - and that skyscrapers were too dangerous and that another attack could come at any time. Eight years later, the NYC skyline has seen several notable additions, particularly in Midtown, including the NYT headquarters. It should be remembered that President Bush did manage to prevent another mass casualty attack in the US since 9/11. We can only hope that President Obama keeps up the fight and continues that string of good fortune.

UPDATE:
Trooferism is still alive and well. It most recently bubbled to the surface in relation to Van Jones, who was tapped by President Obama to oversee the Administration's Green agenda. It was claimed that he signed a petition calling for additional investigations in to 9/11 and a government role in the attacks. Salon contacted numerous other signatories and wanted to know if they would again sign such a petition. Quite a few said they would, including Ed Asner and quite a few academics. One expressed sadness that Jones recanted, while another, Paul Hawken (cofounder of Smith and Hawken) said he wouldn't, because he never signed the original.

UPDATE:
Legalbgl, my friend and coblogger, has posted a remembrance of Hagay Shefi as he has done remembrances for others murdered on 9/11 in past years.

UPDATE:
Kudos to Bing.com and Ask.com for commemorating the anniversary of the attacks. Google (which also happens to own blogspot) and Yahoo! have no such commemoration.

UPDATE:
For an interesting look back at the events of the day, check out Mediaite.com, which has screen shots taken of major websites in the course of September 11, 2001. Also, check out Instapundit's postings through the course of the day.
Posted by lawhawk at 9/11/2009 12:05:00 PM