What is up with South Carolina Governor Mark Sanford (R)? First, he appeared to have dropped off the planet, and then it was claimed that he was out hiking the Appalachians naked. Ummm... Bizarre, but possible. Definitely not something I'd recommend for someone who had aspirations to seek the White House.

Now, it turns out that he went down to Argentina. Argentina?

The oddball admission came a day after his staff explained his prolonged absence by saying Sanford had been hiking along the Appalachian Trail. They were only off by about 5,000 miles - give or take a sleeping bag or two.

"I wanted to do something exotic," Sanford told The State newspaper, adding that he planned to hike the trail before changing his mind at the last minute.

Sanford, who is married, insisted he went to Buenos Aires alone.

The Republican governor hadn't been seen since Thursday. He declined to give further details on his South American trip, saying only that he drove along the city's scenic coastline. Sanford said he needed to recharge his battery after a grueling legislative session.

This report indicates that Sanford's latest statements don't pass the smell test either.

Sanford told The State he was alone on the trip to Argentina. He declined to give any additional details about what he did other than to say he drove along the coastline.

Trying to make such a drive could frustrate a weekend visitor to Argentina. In Buenos Aires, the Avenida Costanera is the only coastal road, and it's less than two miles long. Reaching coastal resorts to the south requires a drive of nearly four hours on an inland highway with views of endless cattle ranches. To the north is a river delta of islands reached only by boat.

Drive along the scenic coastline? If he stayed in Buenos Aires, that would take no more than a few minutes.

What exactly was he doing in Argentina? I don't think anyone knows, even his wife and family.

His presser being held now confirms, and there are conflicting questions over whether his wife knew. I don't think it matters. He's toast.

Who was the other person, and why the trip to Argentina? Who paid for the trip? If the taxpayers paid, we're looking at a bigger scandal. If not, watch him attempt to pull a Spitzer.

Also, he's resigned from the Republican Governors Association. His 2012 chances are done, which is fine by me.


UPDATE:
Ed at Hot Air also notes this is the end of the line, and pulls out a relevant South Park reference.

UPDATE:
Anonymous emailer sends along the following from FoxNews, which can't quite get Sanford's political affiliation correct. He's a Republican. 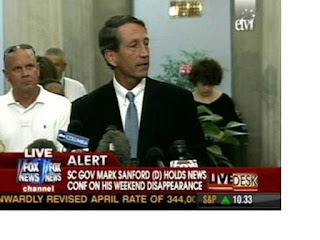 UPDATE:
The state newspapers have been sitting on the fact that he's been emailing the other woman since December. How they got the emails is unknown. But it is interesting that they chose to sit on the information for as long as they have. Waiting for the right time I guess (perhaps when Sanford decided to run for President?) Sanford's wife tried to forgive, but because of this, a separation is in order.