The Cost of Cap and Trade

The Obama Administration is going to get cap and trade, and it's going to cost Americans dearly. Just how badly things are going to work out remains to be seen, but this graphic demonstrates that the negative effects are going to be widespread with a few curious exceptions. 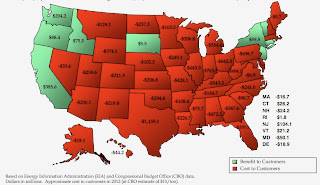 Nearly everyone in the country will be hit with higher costs for everything they do, even in the states that reflect that they will have a surplus allowances for power generation - because energy costs are going to be passed on to the end user - the consumer. It's impossible for those costs not to be passed on because that's how economies work. Businesses are not going to eat the costs, because that would cut into profits, and this is a back door tax.

It will adversely affect the economy and will hit everyone, even if you think that global warming is caused by carbon dioxide. That means nothing if you're now without a job because your company lays you off because higher taxes and a moribund economy has caused business to drop off with no recovery in sight.

UPDATE:
Even the Oracle of Omaha, Warren Buffett opposes cap and trade because it is nothing more than a hidden tax on business and consumers.
Posted by lawhawk at 6/24/2009 11:00:00 AM