Today, Bernard Kerik has been indicted by a federal grand jury in White Plains, New York for multiple charges. Kerik is closely tied to former Mayor Rudy Giuliani, who is running for President on the Republican ticket. Rudy deserves to get dinged for his cozy relationship and the fact that Kerik hasn't shown the greatest character. You judge your candidates by the company they keep, and the media is already focusing on Rudy's questionable judge of character.

However, will equal time be given to investigate the salacious details of Democratic party presidential candidate Senator Hillary Clinton's ties to convicted thief Sandy Berger or convicted felon Norman Hsu? I sincerely doubt it. 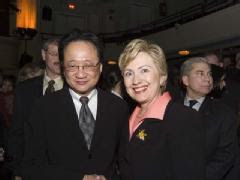 When that photo was taken, Hsu was on the lam for skipping out on the sentencing hearing for his conviction in California for grand theft. He's now in custody for not only that crime, but for multiple charges in multiple states for operating a Ponzi scheme, violating campaign finance laws, and related charges.

If Rudy is rightfully grilled on Kerik, I want equal time for Hillary to deal with Sandy Berger, Hsunami, and one former President, Bill Clinton (who was disbarred for five years in a plea deal to avoid criminal sanction for committing perjury).

I just don't expect it to happen, even if it's possible that Barack Obama is leaking details of the Hsunami to the press.

UPDATE:
The NYT carries an AP wire story, which is indicative of the pervasive media bias. It talks ad nauseum of the effect the indictment might have on the Giuliani campaign, while the fact that Sandy Berger, who entered a plea deal for stealing classified documents from the National Archives, is an integral part of the Clinton campaign, and Norman Hsu was a major fundraiser for Hillary. That doesn't get nearly the same level of coverage, and the media isn't asking the same question as to whether it will be a hit on the Clinton campaign?

Here's what Kerik is being indicted for:

However, the preceding paragraphs (there are six of them) all relate how this is bad news for Rudy. I can't recall a similar story pushed by the AP about the Hsunami and the bad news that means for Hillary's chances.

AP, your bias is showing.

UPDATE:
John McCain wasted no time linking the two. If I were McCain, I'd be wary of going down this road, especially if McCain doesn't want folks to remember his involvment in this, which is one of two reasons I would never vote for him (the other being the McCain Feingold free speech reduction act).