The Iranians are going forward with plans to expand their nuclear enrichment program. Thousands of centrifuges, which are a key component to enriching uranium into material useable in convential nuclear reactors or weapons grade materials are going to be put online in coming months.

The officials, who demanded anonymity because the information was confidential, emphasized that Iranian officials had not officially said the country would embark on the assembly of what will initially be 3,000 centrifuges at Natanz.

But they said senior officials have informally told the International Atomic Energy Agency the work would start next month.

The IAEA is already calling any possible military strikes against the Natanz facility crazy.

Let's get this straight. Iran, whose Holocaust-denying leader Mahmoud Ahmadinejad regularly calls for the annihilation of the West and is looking to build up the country's arsenal of weapons that can do just that, is pushing ahead with its nuclear enrichment plans, despite the weak-wristed sanctions in place or contemplated.

What exactly is going to deter Iran from going forward with its ambitious plans? Harsh language?

ElBaradei said simultaneous gestures of good will, not preconditions for negotiations set by the U.N. Security Council, were required to head off a conflict that could inflame the Middle East.

"There is no reason for Iran to feed nuclear material into enrichment cascades. They can take time out to build confidence (abroad). We have three to eight years (before Iran has bomb-making ability), which gives us a lot of time to reflect."

Western powers have warned sanctions could be significantly toughened if ElBaradei reports to the Security Council by a Feb. 21 deadline that Iran has not shelved uranium enrichment.

The IAEA's job is supposed to be preventing the proliferation of nuclear technology, but it appears to be bending over backwards to enable Iran the opportunity to not only gain technological mastery over the difficult task of enriching uranium, but preempting any possible action that might deter the Iranians from achieving that goal.

The diplomats have been wrong on every step of the way when dealing with North Korea, whose economic situation was far more vulnerable than Iran. They thought that negotiations and providing economic incentives might deter the North Koreans from developing nuclear weapons. Yet, the North Koreans surprised most everyone by claiming to have detonated nuclear devices in underground tests. Whether they were fizzles or component tests is still not entirely clear, but it showed a clear weakness in the thinking of the diplomats who believed that they could talk their way out of having yet another country with nuclear technology that is more than willing to share it with the highest bidders.

And how exactly is Iran building its nuclear facilities? It's not building them above ground where prying eyes can see what they're up to, but in hardened bunkers and underground facilities that are more difficult to spot, target, and destroy in an air attack. Further, the facilities are ringed by air defense systems to make any such attack even more difficult. That increases the possibility that the nuclear enrichment isn't simply for civilian purposes but to produce nuclear weapons.

Global Security has satellite imagery of the Natanz facility with overlays of what is believed to be going on there. It isn't good at all. 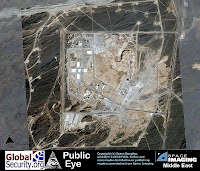 Iran can afford to be the highest bidder, and their current partnerships with North Korea on missile technology is troublesome. The Axis of Evil is sharpening its claws for an endgame that the diplomats are clearly hoping to ignore.

UPDATE:
Clarity and Resolve notes that Iran is seeking to toss the head of the IAEA inspectors that are currently getting the runaround.

Meanwhile, much is being made of the fact that President Bush has stated that the US will go after Iranian assets inside Iraq - as if the US should hold off on attacking those that seek to do harm to the US and our allies inside Iraq just because they may be Iranian? Donald Sensing notes:

Of all the failings of the previous “strategy” in Iraq, directed by the commanders whom Gen. David Petraeus will very soon replace, the main failing was not keeping the main thing the main thing. In counterinsurgency, as with any other kind of fight, the main thing is killing the insurgents, for which civil assistance to Iraqis must play the supporting, not primary role.

Hence, the “surge” of 21,500 more soldiers and Marines being sent to Iraq does in fact represent a new strategy in the recent history of this war, though not new in the history of warfare. Gen. Petraeus, asked recently by one of the Congress’ armed services committees whether 21,500 was enough new troops, replied that how the new troops are used is more important than the number sent.

And lethality is the focus now, as we saw from the release of an unclassified version of the strategy by the plan’s authors themselves, which I analyzed on Dec. 17. Retired General Jack Keane, a former vice chief of staff of the Army, and Frederick W. Kagan, former West Point professor, wrote (and briefed President Bush) that,

We must change our focus from training Iraqi soldiers to securing the Iraqi population and containing the rising violence. Securing the population has never been the primary mission of the U.S. military effort in Iraq, and now it must become the first priority.