Verdict's In: Saddam Gets Death

As I noted yesterday, there's no tree branch or street lamp high enough to hang Saddam for all of his crimes, let alone the ones for which he was convicted earlier today.

He was convicted of crimes against humanity for killing 148 Shi'ites. Two codefendants were also convicted of the crime. Nothing could change the fact that as of today, Saddam is a condemned man.

Now, he's not going to be hanged immediately. There are going to be appeals. There are also going to be additional war crimes/crimes against humanity cases against him. Specifically, Saddam needs to be tried for his ordering the Anfal campaign in which he used chemical weapons to deadly effect killing thousands of Kurds.

Shi'ites are cheering the verdict, but Sunnis are not so happy. That's as expected. Despite the clampdown on Baghdad, there was scattered violence and Shi'ites were celebrating by firing off their rockets.

CBS Morning News is doing its best this morning to smear the verdict and the process of the trial. Citing Amnesty International and Ramsey Clark is not going to cut it with me. Clark has not met a dictator he couldn't coddle. His anti-American views are in stark contrast to the millions of Iraqis who were wronged by Saddam. Amnesty International has politicized its views to such an extent that they're distorted on the issue of eliminating dictators who murdered hundreds of thousands of people, instead finding fault with those who depose such tyrants.

Pajamas Media has a roundup.

Others blogging this historic act: Stop the ACLU, Hot Air, Outside the Beltway, and Gateway Pundit.

UPDATE:
As I noted in the initial posting, the media is spewing its own opinions about the trial and its legitimacy, but avoiding the facts and circumstances of the charges and evidence thereof. Patterico also notes the media carrying water for Saddam - ah, the joys of media bias.

Wait for it. The Political Pit Bull is expecting a whole bunch of "that's nice, but..." coming from the left as the verdict filters down through the masses.

UPDATE:
Michelle Malkin has a big roundup. She points out the charging documents, and a day-by-day outline of the trial. The Anfal trial is ongoing.

Iraq the Model has the pulse of the streets of Baghdad.

Saddam execution will not be delayed for new trials: Post-verdict court press conference by the Iraqi High Tribunal spokesman:

— The district attorney will not appeal the not guilty verdict for one of the defendants and will support his release for lack of evidence against him. I want to make clear what took place today

— Regarding the life and death sentences, an automatic appeals process will take place within 30 days starting tommorow and they can submit memorandums and motions to dismiss following proper procedures. And the court executive committee will examine and either confirm the ruling or overturning the ruling. If they are upheld, the executions will move ahead.

Well, we've always known that Clark was a disgrace, this is simply icing on the cake.

UPDATE:
So what does the UN think of all this? The UN is criticizing the sentence. Bastards. The Secretariat - and Kofi Annan - looked the other way as they were enriched from Saddam's OFF program contributions (aka bribes and corruption). And they have the audacity to criticize the Iraqis' enforcement of the rule of law? The UN HRC avoided the discussion of the hundreds of thousands killed by Saddam over the years, instead trying to focus on the damage done by sanctions.

They don't want to see Saddam hanged. And it speaks volumes.

The HRC hopes he isn't hanged, but will abide by the decision of the Iraqi people. Like the UN has any choice in the matter?

UPDATE:
Patterico takes the LAT to task on yet another op-ed piece masquerading as a news piece. Keep mocking the modicum of justice meted out by the Iraqi court for all the vile acts committed by Saddam Hussein over the past three decades. Media outlets simply do not care that they lace their news stories with their opinions. It is pervasive and it does no one any favors. To their credit, thus far the NYT and WaPo have kept the editorializing to a minimum within the basic news stories though I expect that the analyitical pieces will be forthcoming, so expect that to change as well. 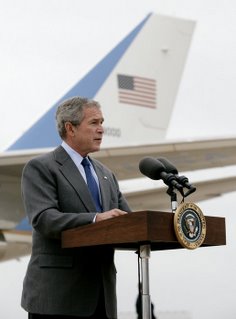 President Bush delivers his statement on the verdict:

THE PRESIDENT: Today, Saddam Hussein was convicted and sentenced to death by the Iraqi High Tribunal for the massacres committed by his regime in the town of Dujayl. Saddam Hussein's trial is a milestone in the Iraqi people's efforts to replace the rule of a tyrant with the rule of law -- it's a major achievement for Iraq's young democracy and its constitutional government.

During Saddam Hussein's trial, the court received evidence from 130 witnesses. The man who once struck fear in the hearts of Iraqis had to listen to free Iraqis recount the acts of torture and murder that he ordered against their families and against them. Today, the victims of this regime have received a measure of the justice which many thought would never come.

Saddam Hussein will have an automatic right to appeal his sentence; he will continue to receive the due process and the legal rights that he denied the Iraqi people. Iraq has a lot of work ahead as it builds its society that delivers equal justice and protects all its citizens. Yet history will record today's judgment as an important achievement on the path to a free and just and unified society.

The United States is proud to stand with the Iraqi people. We will continue to support Iraq's unity government as it works to bring peace to its great country. We appreciate the determination and bravery of the Iraqi security forces, who are stepping forward to defend their free nation. And we give our thanks to the men and women of America's Armed Forces, who have sacrificed so much for the cause of freedom in Iraq -- and they've sacrificed for the security of the United States. Without their courage and skill, today's verdict would not have happened. On behalf of the American people, I thank every American who wears the uniform, I thank their families -- and I thank them for their service and continued sacrifice.

Thank you very much.