I've written essentially the same opening each of the past few years. It's still appropriate to remember today, as it was when I first wrote this:


September 11, 2001. New Yorkers were heading to the polls to vote in primary elections to determine the next mayor of the city. It was a morning full of promise and baseball fans were excited about the Yankees' chances of making the playoffs, the Mets thinking about the future, and the start of the new football season. In other words, it was a day not unlike the ones we've experienced once again this year.

While everyone was focused on the day ahead, another group of people were thinking about the mission that would forever alter the skyline of NYC and alter history. Al Qaeda's terrorists were already on board four jets bound for New York and Washington DC and had already overpowered the crews.

I was on a NJ Transit train with my dad when I first noticed something wrong at the WTC out of the corner of my eye; it was smoke coming from the upper reaches of the tower.

The world changed, and I didn't quite realize it. No one did.

People watching the morning news didn't know it either at first. But they would soon be glued to broadcasts that showed the horrors of the worst terror attacks ever perpetrated.

The damage done on that morning was nearly impossible to comprehend. In the mere blink of the eye, nearly 3,000 people were condemned to death and the World Trade Center would soon be reduced to a pile of rubble that would burn for weeks on end. Reports would come in that a third plane had struck and damaged the Pentagon.  But the death rattle of the Twin Towers would continue for just under two hours and victims trapped above the fires had to make the choice to stay and choke on the heat and smoke or jump to a certain death. All too many make that decision to jump. Firefighters on the ground also succumbed before the towers fell - falling debris hitting firefighters and fleeing people alike. 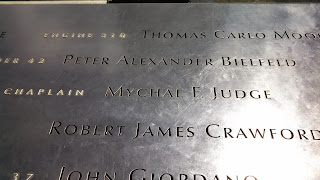 Victim Number One would be there to comfort those who fell. Rev. Mychal Judge of the FDNY was comforting fallen firefighters and office workers alike when he was struck and killed by debris. So many people inside the Department and around the City thought so highly of him that he was honored as the first victim of the attacks - so that he could comfort and aid all those many others who were murdered on that day - to guide them to Heaven.

All too many would unfortunately follow him - and not by their own choice.

Here are remembrances of a few of those killed on 9/11, as written by my friend legalbgl for Project 2,996:

By happenstance, I happened to come across Hagay Shefi's name, which was found on the North Memorial Pool:


Coming full circle, on May 1, 2011, the United States finally caught up with Osama Bin Laden in Pakistan. In a daring raid on a compound near Pakistan's military academy, US special forces killed bin Laden and captured a treasure trove of intel.  That's small consolation for the thousands of families and friends who still grieve the senseless murder of their loved ones in New York, Washington DC at the Pentagon, and in Shanksville, Pennsylvania. The profound loss is a heavy burden on all those who were there and on those who lost loved ones.

Local commemorations are already underway and will continue through the week throughout the region. In fact, this is the first year that the WTC Museum will be open on 9/11. The museum has not opened without controversy. There's the question of the incredibly high cost for entry, the tacky gifts included in the gift shop, potentially locating restaurants in the museum, and lawsuits filed over the installation of the WTC cross. The cost to entry is still too high (it should be free) and the lawsuits to block the installation of the WTC cross, which were filed by an atheist group, lost.

Part of the reason that the WTC Museum charges fees is that it's a private foundation operating the site. They have to deal with security and overhead of the facility, which is quite significant. I've long called for the National Park Service to take over and that this would necessarily reduce the overall costs and improve the accessibility to the site. While I don't need to be able to visit the museum myself, the museum is for those who weren't even born yet or understood what actually happened at the WTC site on 9/11 and the weeks, months, and years that followed. The museum should be free for all to come and bear witness to the events. This should be a no-brainer, and yet no one can agree on making that happen.

Meanwhile, the federal government created the James Zadroga health and compensation fund because of the ongoing health concerns of those who carried out relief and recovery efforts at Ground Zero. More people continue to seek assistance via the program, including those emergency responders who came from across the country to spell the FDNY and NYPD and PAPD in the grim task of recovering the remains of those murdered. The Zadroga Act wasn't perfect by any means and it has come too late for some, but it's a start to compensate and aid families of responders who are suffering from all manner of ailments  attributed to Ground Zero exposure. The Act is scheduled to sunset unless it is reauthorized, and given the dysfunction in Washington, it can't be taken for granted that it would be continued.

Construction at the site doesn't domination the front pages of local papers as it used to, as construction is nearing the end on several portions of the site. The entire Western side of Ground Zero is now essentially built out - between the Memorial, Museum, and 1WTC.

1WTC (aka the Freedom Tower) has finally recaptured part of the skyline and is regarded as the tallest skyscraper in North America at 1,776 feet. 1WTC is set to open later this year even as work continues around its base.

Construction of the Transit Hub is also underway, and Santiago Calatrava's design shows its final form, even as the cost pushes past a staggering $4 billion. That's nearly $2 billion over the original budget estimate, and the costs associated with this has sapped the Port Authority's ability to build new infrastructure in the region, which is its core mission. Instead, the agency has poured billions into a project that doesn't add any cross-river capacity.
The price does provide for a lot of marble though.

The Port Authority has announced that they expect the transit hub to be open by the end of next year. I personally don't see it happening, unless the Port Authority will open it the way the MTA has done at the Fulton Center. I fully expect that sections will be closed off for construction to continue as the main transit hall is largely available.

So, while the hub will be visually interesting and definitely become a photographer's favorite, the problem with the PATH transit hub and all that spending is that it doesn't exactly add capacity to the system.  The Port Authority is fudging the figures so as to claim that 250,000 pedestrians will use the transit hub daily. That's not exactly true. 35,000 people use PATH daily in and out of the WTC. The rest are people who the Port Authority expects to visit the mall being built as part of the hub, and the people who are working in 1WTC and 4WTC as those spaces are filled out. 250,000 people are not going to be taking PATH daily.

4WTC is nearly done, though I'm surprised that there's an exterior lift still attached to the south side of the building. Even 1WTC has been buttoned up, and it was topped out after 4WTC. That's odd to say the least, but tenants are supposed to be moving in there next month. Maybe.

2 WTC remains a stub, and construction has finally resumed at 3WTC after Larry Silverstein finally secured financing and other commitments to build out the building that had reached about 10 stories before grinding to a halt. Silverstein signed GroupM to lease 500,000 square feet of space in the tower, which enabled the developer to move ahead and secure additional financing from the Port Authority. That financing raised questions from some, who thought this was a giveaway but ignores that this was a loan guarantee - the agency wasn't actually putting the money up. The only way the Port Authority loses on the deal is if Silverstein defaults, which isn't likely to happen.

Lagging behind all the other structures is the Vehicle Security Center that runs along the south side of the WTC and which was previously occupied by the former Deutsche Bank building. There's a new platform and entrance area being built for vehicles servicing the WTC complex, but it's years behind schedule and over budget (like everything else at the WTC).

Much of the fault for the slow pace of rebuilding is the result of Port Authority actions and omissions to limit cost increases, especially when it comes to the transit hub and the delays in building led to still more costs incurred. In order to complete construction of the memorial in time for the 10th anniversary, the Port Authority needed to spend $500 million more on the transit hub to build out the memorial while the site was erected around the transit links.

At the same time, the Fulton Center, which is a block East of the WTC site is nearly open, and will eventually link to the PATH transit hub via the Dey Street connector, and ultimately those working at the World Financial Center (Brookfield Place) would be able to access Fulton Center without having to travel outside. It's likely to be opened in time for when 4WTC is fully opened for business.

The skyline will never be the same. Neither will our hearts, which are heavy with the loss and supreme sacrifices made on 9/11 by the rescue personnel who bravely rushed up the towers even as people were racing to get out of the towers or gasping as people were forced to jump to their deaths to avoid being burned alive in the fires that racked the towers.

The media will be out as usual. The Memorial is busy preparing the site for the memorial service and the media is getting set up. These photos were taken on September 10, 2014:
This year Century21, the department store whose main location is across from the WTC and which was badly damaged by the attacks, has unveiled a building wrap in time for tomorrow:

Professional trading signals delivered to your mobile phone every day.

Start following our trades NOW & gain up to 270% daily.