This post is my continued commitment to Project 2,996. Started in 2006, Project 2,996 was started by Dale Roe. However, I was unable to determine if Dale was continuing his enormous commitment this year. As in years past, I have decided to continue Project 2,996 on my own. This year I remember Captain Patrick “Paddy” J. Brown, FDNY. Please also take a moment and my past memorials to Donna Bernaerts-Kearns, Daniel Thomas Afflitto, Alison Marie Wildman, and Hagay Shefi, as they deserve to be remembered today also. 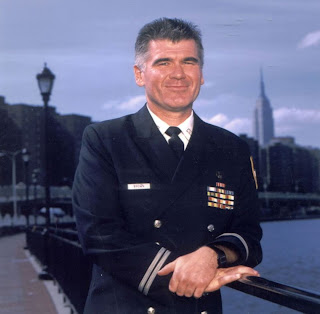 The term “hero” is a term that is often thrown around for people who have passed. For Capt. Brown the term is aptly used, for even a quick search reveals that he is a true Hero. At age 17, Capt. Brown joined the U.S. Marines during the height of the Vietnam War and obtaining the rank of Sergeant. Following his tour in the Marines, Paddy followed his life-long passion and joined the fire patrol (as a kid, he used to listen to fire calls on a scanner in his bedroom and responded to fire calls on his bicycle.) In 1977 was appointed to the FDNY.

While in the FDNY Paddy was assigned to Ladder 26, Rescue 1 and Rescue 2. He was promoted to a Lieutenant and was assigned to Ladder 28. Later, after promotion to Captain, he moved to Engine 69. His final assignment was at Ladder 3. During his career Capt. Brown obviously saved many lives in New York City. One such incident occurred in May 1991 while assigned to Rescue 1 in Manhattan. Then Lieutenant Brown responded to a fire call in a 12 story building. After running up 12 stories to the roof, Lt. Brown saw 2 victims trapped and ready to jump. Paddy organized a daring rope rescue, which is still known as one of the most daring rescue in the FDNY’s long storied history. The incident, was captured on film by a TV crew, and became featured on the TV Show Rescue 9-11. Footage of the incident can be found on the Captain Patrick J. Brown Memorial Foundation's website.

While building a most impressive career at the FDNY, Paddy was also a passionate runner (participating in six marathons.) He was also a golden gloves boxer, a 2nd degree black belt in Karate, and donated his time to teaching martial arts to the blind. He loved Broadway shows and although never married, was once voted New York City’s most eligible bachelors. Highlighting his generosity, whenever he was awarded a metal the monetary award was donated to the Burn Unit at Cornell University's Burn Unit.

Capt. Brown was among the first Firefighters to respond on 9/11. As stated on his Foundation’s webstite:

On September 11th, 2001 Pat and eleven men from Ladder 3 responded to the attacks at the World Trade Center. His firehouse, "3 Truck", is located in very close proximity to the Twin Towers, so his company were one of the first responders on the scene. Along with so many other rescue workers, the men of Ladder 3 participated in perhaps one of the most successful rescue efforts in U.S. history. These brave men, at their own peril, managed to safely evacuate over 25,000 people from the World Trade Center on that most tragic day. It is believed that Paddy and his men were on the 40th floor of the North Tower when it fell.

Patrick's life, soul and spirit were remembered at a Memorial Mass on what would have been his 49th birthday, November 9th, 2001, at St. Patrick's Cathedral. Thousands packed the enormous church to overflowing, while firefighters lined up three and four deep, as far as the eye could see on Fifth Avenue to honor and respect this legendary NYC Firefighter. Pat's remains were recovered from the rubble of the North Tower on December 14th, 2001. On a cold clear night two weeks later, according to Paddy's wishes, his ashes were spread by his family and friends in Central Park along a path where he loved to jog.

As I said, Capt. Brown is a true hero in every sense of the word. Paddy dedicated his life to saving others. He placed his life in danger so that others may live. His death was not only a tragedy to his family, to the FDNY, but to all of New York City. The Captain Patrick J. Brown Memorial Foundation takes steps to preserve that legacy, with an annual fundraiser, which last year raised $3,000 for Building Homes for Heroes. This year's fundraiser will be at Eleanor Rigby's on Long Island on November 6, 2010. For more information, click here.
Posted by Legalbgl at 9/11/2010 11:03:00 AM