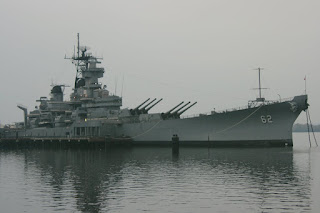 The Battleship New Jersey Museum in Camden, New Jersey is suffering from the recession and has taken to finding new and creative ways to raise money. They had even gone so far as to auction off the chance to sit in the fire control chair and fire one of the 5 inch guns.

No word on the target though. Trenton is probably out of range.

This year, the tourist attraction on the Camden waterfront is holding special events, such as the party that drew 1,800 people for the fireworks display on New Year's Eve, and the July Fourth "high-end barbecue that brought in close to six figures in profits."

It also stepped up its sleepover encampment program, now expected to bring in about 20,000 visitors this year. And it's planning new tours, including one that will allow people to load a projectile and powder bags in a turret below one of the big guns bristling from the deck.

"The new mantra is: 'If we can't create a 'wow,' we're not going to do it,'" said James Schuck, who was named the president and chief executive officer of the Battleship New Jersey Museum and Memorial over the summer.

"If it is a 'wow,' it will attract people and, once they come, the ship sells itself. You fall in love with it."

"We have a company putting together a whole plan," he said. "People get a kick out of seeing the ship come alive."

In June, Big J found another way of making money. It auctioned off the right to sit in a gunner's chair and fire a five-inch gun. The weapon was loaded with a pound and a half of gunpowder and the blast - the first from its barrel in 20 years - was impressive. So was the price for firing it: $2,600.

The battleship opened as a waterfront destination in 2001, and for several years received $3 million in annual state aid. In 2007, the funding was slashed to $2.8 million. That was followed by cuts in successive years to $1.5 million and $1.35 million.

The USS New Jersey was one the largest battleships ever built, and with her sister ships Iowa, Wisconsin, and Missouri, were the largest built by the US. The New Jersey was also one of the most decorated ships in the US Navy, having fought in World War II, Korea, Vietnam, and provided support for operations in Lebanon.