You Don't Say: Hamas Acts Like a Bunch of Terrorists

They're busy crowing about how they defeated the Israelis. They're claiming that they destroyed tons of Israeli tanks, killed a bunch of Israeli soldiers and that only a few of their own were killed in the fighting.

Lying about casualties, who was killed, and purposefully took off their uniforms so as to blend in and avoid having their numbers counted or killed nearly as easily by IDF pinpoint strikes.

It's all just another day at the office for Hamas.

The journalist quoted a top Hamas operative as saying that Hamas lost less than 10 percent of its weapons and ammunition in the past three weeks. "Despite the severe blows, Hamas remains as defiant as ever and it's believed that they still have a lot of weapons," the journalist said.

Various sources in the Gaza Strip, including medics, journalists and a few Hamas supporters are convinced that the movement is not telling the truth about its human losses and the damage done to its security and civilian infrastructure.

One medic said he believes at least 250 Hamas militiamen died in the fighting, while a journalist put the figure at over 400.

According to Palestinians in the Gaza Strip, on the first day of the war Hamas ordered its gunmen to take off their uniforms to avoid being detected by the IDF. The Hamas gunmen who participated in the fighting against the IDF were all dressed as civilians and the majority arrived at hospitals without their weapons or any other signs revealing their status as gunmen.

Fatah representatives in the West Bank claim that the majority of Hamas's fighters were actually hiding during the IDF operation and had not taken part in the fighting.

They pointed out that only a few hundred gunmen belonging to Hamas and other armed factions, including Fatah's armed wing, the Aksa Martyrs Brigades, and Islamic Jihad's Al-Quds Brigades, took part in the fighting after the IDF sent ground forces into the Gaza Strip.

No one will be able to figure out how many terrorists died because it doesn't serve the Palestinian cause to find out just how many terrorists were part of the total. Hamas purposefully hid behind civilians so as to mask their true numbers and to inflate the civilian body count in more ways than one.

Of course, all those uniforms are back on display. Smile for the cameras because Israel is again taking notes. 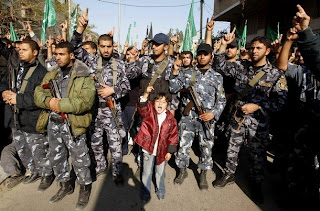 The one thing the terrorists did get right is that Israel stopped short of destroying Hamas, so they can claim that as a victory. Israel didn't stop Hamas from firing rockets or mortars into Israel, and that remains a serious threat. Israel has to adopt a zero-tolerance approach to further terrorist attacks to thwart Hamas from ratcheting up the violence just as it did during the 6-month hudna, which Hamas violated beginning on the fifth day. Hundreds of rocket attacks later, and Israel finally responded. And that was years after Hamas began its rocket war against Israel.
Posted by lawhawk at 1/20/2009 09:25:00 PM