Hamas continues firing long range rockets into Israel. The battle in Gaza rages on as Israeli forces have pushed into more urban areas around Gaza City. Hamas is taking a serious pounding but don't expect to see a white flag raised anytime soon. However, note that once Hamas starts talking about a ceasefire, be suspicious. That means that Israel is in a position to crush the group once and for all, and Hamas is looking for a hudna in which to once again regroup and rearm.

The Israeli investigation into the UN school incident notes that an Israeli tank shell missed its intended target - a group of terrorists firing mortars in the vicinity of the school:

One of the deadliest single incidents since the offensive began was an Israeli strike near a U.N. school Tuesday that Gaza health officials said killed 39 Palestinians. On Sunday, Israeli defense officials said an investigation by the military concluded that an Israeli mortar shell missed its target and hit near the school.

The Israeli investigation concluded that troops fired three mortar shells at Hamas militants who had just launched a rocket, the officials said. Two shells hit the target, but a third missed by about 30 yards, striking near the school and killing bystanders. The Israeli military believes the number of casualties was inflated by Hamas.

The defense officials spoke Sunday on condition of anonymity because the investigation has not been made public, and there was no official comment from the military.

That's right folks, the terrorists were busy firing from in and around the school, but somehow it's Israel's fault? Sorry, but that's not how it works under international law. Terrorists operating with human shields are responsible for those casualties. Terrorists operating in dense urban environments and firing mortars within yards of a school are responsible. Are the deaths and casualties in the school tragic? Absolutely, but I will not blame Israel one whit for them because but for Hamas firing mortars at those Israelis, Israel would not have returned fire.

Hamas attempted to shoot down an Israeli aircraft, but was unsuccessful. There had been reports that the terrorists got their hands on surface to air missiles (one of the nasty surprises that they claimed to have for Israel), but the IAF pilots have been prepared for that possibility. Pilots routinely fire off flares (which the idiots in the media call weapons systems) to deter heat seeking missiles from locking on to their aircraft. Helicopters are more susceptible to missile attacks, but they too have flares and jammers.

Ja'abri was not expected to have been at home at the time as he is believed to be in hiding, possibly under Shifa Hospital in Gaza City, in another bunker, or in an apartment building filled with civilians.

Also in overnight air raids, the IAF hit a mosque in Rafah which served as a training camp and meeting place for Hamas operatives as well as an anti-aircraft missile warehouse, the army said.

The air force also bombed nine tunnels along the Philadelphi Corridor and about ten other weapons storehouses throughout the Gaza Strip.

At least 820 Palestinians, roughly half of them civilians, have died since Operation Cast Lead was launched on December 27, according to Palestinian medical officials. Thirteen Israelis, among them 10 soldiers, have been killed.

Take the Palestinian casualty figures with a grain of salt the hospital officials are co-opted by Hamas and aren't likely to know which men coming in are Hamas; it's not as though they wear uniforms.

The New York Times has a major article about the smuggling tunnels and how that they are a lifeline for Gazans. Gaza wouldn't need those tunnels at all had Hamas not engaged in a war against Israel forcing both Egypt and Israel to close the border. Hamas has breached the Egyptian border twice - invading Egypt twice in 2008 - because Egypt wants nothing to do with Hamas either.

The smuggling tunnels are owned and operated by Hamas, or are partnered with Hamas, which takes a cut of every transaction. Those tunnels are how Hamas makes money and sustains its operations. They are also used to transmit weapons and equipment. They serve no other purpose despite the photos taken by journalists cozy with the smugglers depicting them bringing in sheep and goats. Put bluntly, those photos are staged especially since there are farms in Gaza and no one has stopped Gazan farmers from tending their flocks but Hamas.

Allahpundit at Hot Air wonders how a UN official could go on the record and claim that the Israelis told him privately that there were no mortars being fired from the UN school in Jabilya while the Israeli ambassador to Austria stated explicitly that Hamas was storing weapons under that same school.

I've previously reported that two Hamas thugs were killed in the school incident. Allahpundit notes the reports stating that they were unarmed at the time. If they were a mortar rocket team, they could easily have been unarmed at the moment they were killed. How? Simple. Watch this video and see. The terrorists use rope to hang the mortar round in the barrel and when they pull the rope, the mortar round drops into the barrel and fires. It's a way to fire the mortar remotely and it makes the rounds fired even more inaccurate since you would be changing the trajectory of the round each time. It certainly isn't proper technique to fire an aimed round. If the terrorists are attacked, they look like they're just another bunch of civilians killed in the return fire when the reality is so much different.

Prime Minister Olmert has slammed the international media and diplomats for one-sided calls for Israel to stop its national defense, ignoring Hamas and their incessant attacks on Israel.

"For many years we've demonstrated restraint. We reined our reactions. We bit our lips and took barrage after barrage," said Olmert in remarks at the opening of the weekly meeting of government ministers. "No country in the world – not even those who preach morality to us – would have shown similar patience and self-control."

The prime minister's comments appeared to be aimed at the United States, which abstained last week from a vote and allowed the United Nations Security Council to pass Resolution 1860, calling for an immediate ceasefire and withdrawal of all IDF forces from Gaza.

On January 8, U.S. Secretary of State Condoleezza Rice praised the Council for passing the resolution, which she called "a step toward our goals." Although she noted that the U.S. recognizes the right of Israel "like other states, to exercise its right of self-defense," she softened the statement by adding "We have said to Israel that it is obligated to take feasible steps to minimize the impact of any actions on civilians."

Israel has taken feasible steps to minimize the impact, including telegraphing where and when Israel is to attack. The Israelis have repeatedly dropped leaflets warning Gazans of impending attacks, phoned Gazans to warn them that Israeli airstrikes are to occur, and I've actually argued that these are counterproductive because it tips Hamas off to the location of attacks so that they can increase the numbers of human shields kept in the vicinity to maximize the civilian casualties.

Meanwhile, Hamas says that they're no longer interested in Gilad Shalit's wellbeing. They were never interested in his life; he was a pawn they were hoping to use to secure the release of hundreds of terrorists from Israeli jails. I've repeatedly stated that the world should have been demanding humanitarian gestures from Hamas, including Shalit's release, but they instead focus on demanding concessions from Israel in the name of humanitarian relief. Gaza needs humanitarian relief - in the form of the riddance of Hamas from its midst. So much of the suffering there is due to no one but Hamas.

Fatah has been doing its best to clamp down on pro-Hamas sympathies in the West Bank. That's most likely because they expect to be called upon to take over Gaza once Israel is done destroying Hamas' capabilities to function. Hamas and Fatah have fought a civil war over the future of Gaza, and Fatah lost; its forces fled Gaza, and those who were captured were killed or displayed for propaganda purposes. There's no love lost between the two terrorist groups.

Israellycool continues his daily coverage of the situation in Gaza.

UPDATE:
Ralph Peters slams the propaganda spewed by the media - noting how the casualties in Gaza are the fault of no one but Hamas. Israeli weapons may have caused the injuries and ended lives, but Hamas killed them.

Hamas is a Jew-killing machine. It exists to destroy Israel. What is there to negotiate?

When Hamas can't kill Jews, it's perfectly willing to drive Palestinian civilians into the line of fire - old men, women and children. Hamas herds the innocent into "shelters," then draws Israeli fire on them. And the headline-greedy media cheer them on.

Hamas isn't fighting for political goals. "Brokered agreements" are purely means to an end. And the envisioned end is the complete destruction of Israel in the name of a terrorist god. Safe in hidden bunkers or in Damascus, the Hamas leadership is willing to watch an unlimited number of civilians and even street-level terrorists die.

UPDATE:
Note that various media reports will indicate that Israel has attacked a number of mosques. There's a damned good reason for that. Hamas has turned many into ammo dumps and they store weapons there. Carl in Jerusalem has video of one such airstrike. Note too that Hamas is storing weapons in schools at under hospitals, hoping and knowing that Israel would not purposefully strike those targets. In that way, Hamas hopes to retain weapons and equipment it needs to fight Israel for the long term. 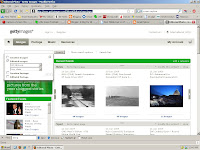 So, I'm checking Getty Images this morning, as I've been doing for some time now as part of my morning ritual, and guess what they're leading with?

Photo montages of the Israeli occupation of Gaza since 1967.

Israel has unilaterally withdrawn from Gaza since 2005. Israel provided civil administrative control over Gaza to the Palestinians as part of the Gaza Jericho Accords, Wye, and the Oslo Accords beginning in 1993. Israelis living in Gaza were forcibly removed in 2005. No Israeli occupation since then.

By running the photo series as an occupation since 1967, it is a blatant lie about the current situation in Gaza. It is a purposeful misrepresentation and distortion.