A Congolese thug is currently on trial at the International Criminal Court at the Hague for war crimes, including inducting children as young as 15 into his militia.

Thomas Lubanga Dyilo is accused of forcing children under the age of 15 to fight in the military wing of the Union of Congolese Patriots.

"Lubanga's armed group recruited, trained and used hundreds of young children to kill, pillage and rape. The children still suffer the consequences of Lubanga's crimes. They cannot forget what they saw, what they suffered, what they did," ICC chief prosecutor Luis Moreno-Ocampo said as the trial opened on Monday morning.

Lubanga pleaded not guilty. His defense will not begin its opening statement until Tuesday. He sat largely impassively, in suit and tie, as the prosecution opened its case.

This is little different than what Hamas and other jihadi groups has done in Gaza and throughout the world for years on end. Hamas has been indoctrinating children in the jihad against Israel, and repeatedly marches them into battles, using them as human shields and hoping to incite Palestinians to further violence. Photo evidence courtesy of Charles at LGF. 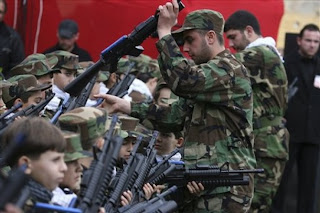 That's Hizbullah indoctrinating another generation to hate Israel and seek its destruction. They're busy passing out toy guns to tots and young ones, but before long, they're out throwing rocks at Israelis, but they will be given the real thing soon enough.

Where is the world outcry and demand that Hamas leaders be indicted for war crimes and to stand trial for their actions? Nary a voice will be raised to do so, despite the overwhelming piles of evidence of just that.