Another Election *Almost* in the Books

We are only a few hours from possibly knowing who the next president of the United States of America will be. Who will it be? Will we be swearing in Sen. Barack Obama or Sen. John McCain as the next President of the United States come January? I think George Washington would be pretty excited to know that his great experiment has lasted this long and will be carrying out yet another peaceful transfer of power based on the will of the people. Most people didn't give this nation much of a chance to overcome its birthing, let alone the growing pains that included the end of slavery. We have come so very far in a relatively short amount of time, and yet our best days are still ahead of us, regardless of who wins.

Voters had to choose from two very divergent political viewpoints, and emotions will run hot for quite some time to come. They had to deal with that back in Washington's day as well. Back then, you had federalists and anti-federalists running around and publishing pamphlets supporting or opposing various aspects of government and the grand experiment that we were about to undertake. These folks used pseudonyms, but we know them by their actual names - Alexander Hamilton, John Jay, James Madison, Thomas Jefferson, George Clinton, and Patrick Henry. 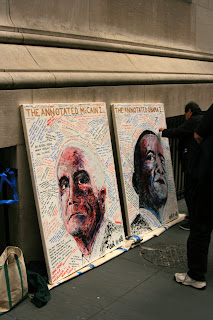 On this most patriotic of days, I decided to head down to Federal Hall, where Washington was inaugurated as the first President of this great nation. 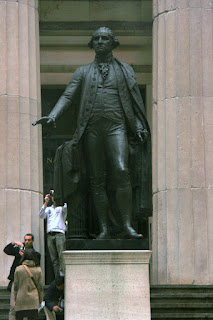 It was actually my first time inside, and it's a shame I hadn't been inside earlier. It really is a magnificent building. It's notable for being where John Peter Zenger was arrested for the crime of libel against the Crown, but it also became the first Capitol of the United States as Congress held session here prior to the construction of the District of Columbia. It's also where the Bill of Rights was ratified.

Most folks usually take photos outside, but the interior rotunda is quite impressive. There are also a few interesting pieces on display. The following photo of a well worn book is none other than the very bible on which George Washington took the oath of office. George H.W. Bush (Bush 41) was sworn in with this bible as well. It has an interesting history all of its own. The bible was on loan from the St. John’s Lodge of Ancient Free and Accepted Masons in Newburyport.

Since the results aren't quite in yet, let's not forget that the media and pundits and everyone in between once wrote off another politician seeking higher office only to have to eat a mighty large amount of crow. Let's not forget President Thomas E. Dewey Harry S. Truman. 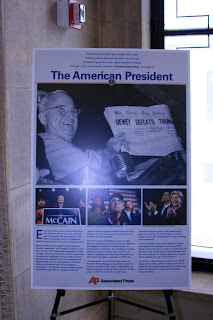