Who Were The Other Clients?

We know that client number nine was former New York State Governor Eliot Spitzer, but who were the other clients? Jammie has uncovered another individual involved in the Emperor's Club mess. Meet possible client number six: The Duke of Westminster, Gerald Cavendish Grosvenor.

The Duke of Westminster is an alleged former client of the escort agency used by Eliot Spitzer, the disgraced Governor of New York, it has emerged.

The Duke, whose £7billion property empire makes him Britain’s third richest man, was accused of paying thousands of pounds to prostitutes he ordered through the London branch of Emperors Club VIP, which is at the centre of an FBI investigation into an international vice racket.

Court papers lodged by the FBI refer to a meeting in London between a call girl known as Astrid and a man referred to as “Client 6”, prompting intense speculation over the identity of the mystery man.

There is no suggestion that the Duke, who is the head of the Territorial Army, is Client 6, but the court documents will bring back unwelcome memories for the aristocrat, whose full name is Gerald Cavendish Grosvenor, following a tabloid newspaper sting last year.

Zana Brazdek, then aged 26, told the News of the World that the Duke had paid her £2,000 for sex at a mews house he owns in St Anselm’s Place in Mayfair, West London. He had booked her through Emperors Club VIP.

Miss Brazdek claimed the Duke bragged to her that he knew how to find Osama bin Laden and talked about his Army role and going to Afghanistan.

Well, we know that the Emperor's Club catered to the high and mighty, so that figures. 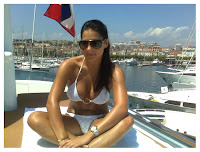 We might not have any more clients named, but we now have a name and a face to go with the mysterious Kristen. Her real name is Ashley Alexandra Dupre, and she's an aspiring musician. I suspect that her career might get a boost in unexpected directions:

The New York Times reported that the real name of the prostitute - identified as "Kristen" in court papers alleging that Gov. Eliot Spitzer paid more than $4,000 for her services - is Ashley Alexandra Dupre.

Don D. Buchwald, a New York lawyer, confirmed to The Associated Press that he represents Ashley Alexandra Dupre, the same woman in the Times story. "That's as far as I can go," he said.

A man who answered the phone at the home of the woman's mother in New Jersey and identified himself as Dupre's brother, Kyle, told the AP he did not know why Dupre would agree to be interviewed about the scandal.

"I've talked to my sister every five minutes since this happened, and I'm not going to comment on it," he said. "She's just trying to get through this."

Dupre's MySpace page provides a window into her life as she went from a broken home in New Jersey to a music career in the city.