Norway has made the very public claim that it will go carbon neutral in emissions by the year 2030. Great.

There's just a problem with those plans. Huge, in fact.

Norway’s bold promise raised the bar for other nations, which were mostly still struggling to figure out how to reduce emissions, by even a fraction. Then, in January, the Norwegian government went a step further: Norway would be carbon neutral by 2030, it said.

But as the details of the plan have emerged, environmental groups and politicians — who applaud Norway’s impulse — say the feat relies too heavily on sleight-of-hand accounting and huge donations to environmental projects abroad, rather than meaningful emissions reductions.

That criticism has not only set off anguished soul-searching here, but may also come as a cold slap to the many countries, companies, cities and universities that have lined up to replicate Norway’s example of becoming carbon neutral — with an environmental balance sheet showing that they absorb as much carbon dioxide as they emit.

Many signed on not only to set an example of their own but also for a kind of public relations boon, or to pre-empt or get out ahead of government regulations they feel are probably inevitable. In the past year, the Vatican announced that it was carbon neutral, and companies like Wal-Mart say they are aiming for that goal.

But their claims — like Norway’s — all require asterisks, like home-run records buoyed by steroids. And as the Norwegian plan shows, achieving a carbon-neutral state, for now, often depends as much on how you make the calculation and how much money you spend, as it does on hard work, sacrifice or even innovation.

Indeed, it's done with sleight of hand and doesn't actually reduce tailpipe or smokestack emissions, but rather offsets them with spending on projects elsewhere (like planting trees).

This is a complete joke and it's actually on the taxpayers who are funding all this craziness.

It's one thing to support reduced pollution emissions because it improves air quality. It's quite another when the science is barely there to actually support such drastic moves that may have absolutely no effect on emissions whatsoever.

Oh, and are those carbon-neutral plans taking into account a growing population - after all, everyone exhales carbon dioxide which these plans are all purporting to make disappear in carbon-neutral schemes. 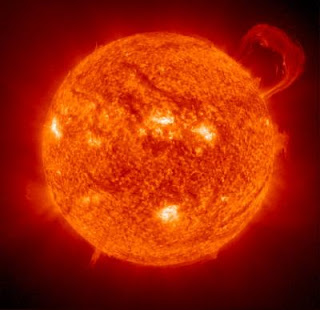 Yes folks, that is the sun. That great glowing orb in the sky whose presence during the daylight hours warms the planet up and when the sun sets, will cool things off. It drives the solar wind, climate changes on planets near and far in the solar system, and whose full impact on the Earth's climate is still coming into focus, even as we have started to understand how solar cycles affect the Earth's climate.
Posted by lawhawk at 3/22/2008 01:45:00 PM