A day after Islamic terrorists were arrested in a plot to murder one of the cartoonists who penned the Mohammed cartoons that sparked worldwide riots that left more than 100 dead, several embassies torched, and hundreds of businesses smoking ruins, papers across Western Europe have reissued the cartoons in solidarity.

Newspapers in Spain, Sweden and the Netherlands also republished the drawing Wednesday as part of their coverage of Tuesday's arrests.

The image, by Morgenavisen Jullands-Posten cartoonist Westergaard, was one of 12 cartoons about the Prophet Mohammed originally published in September 2005. Westergaard's cartoon depicted the prophet wearing a bomb as a turban with a lit fuse.

Violent demonstrations erupted across the world in early 2006 after other newspapers reprinted the images as a matter of free speech. The uproar came as some Muslims believe it is forbidden by the Quran to show an image of the prophet.

Many protesters directed their ire at Denmark, prompting the closure of several Danish embassies in predominantly Muslim countries, including Indonesia and Pakistan. There were also attacks on other diplomatic missions in Iran and Syria among others.

The Danish Foreign Ministry has said it is keeping a watch on the situation at its embassies and has yet to report any incidents.

Muslim leaders in Denmark Wednesday attacked the republication of the cartoon, as well as the alleged murder plot, while calling for calm. Imam Mostafa Chendid, chief of the Islamic Faith Community, told AP his group was discussing whether to hold a demonstration before parliament, adding: "We are so unhappy about the cartoon being reprinted."

"No blood was ever shed in Denmark because of this, and no blood will be shed. We are trying to calm down people, but let's see what happens. Let's open a dialogue."

And again, the US media outlets refuse to carry them. 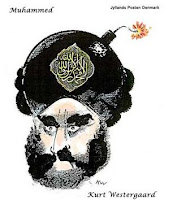 Chendid doesn't want dialog; he wants to dictate what can or can't be published in an open society. He wants such images banned. That's completely antithetical to the concept of free speech, which is a cherished and hallowed concept in Western Civilization. The Islamists refuse to accept such concepts, and instead hope to subvert Western concepts to their own purposes.

The NYT Blog has more on the story, and it again refuses to publish the cartoons, though it does note that bogus cartoons were circulated by the Islamists to inflame the masses to riot and that the Danish Muslims are planning to move on and not protest a move to include copies of the cartoons in a Danish museum.