The Marine Corps Birthday and Project Valour IT Fundraiser Continues

Today is the 232nd anniversary of the founding of the United States Marine Corps.

Since that day in 1778, Marines have gone wherever a grateful nation has asked them, and they've served with honor and dignity. The Marine Corps Hymn speaks of the missions and bravery:

From the Halls of Montezuma,
To the Shores of Tripoli;
We fight our country's battles
In the air, on land, and sea;
First to fight for right and freedom
And to keep our honor clean;
We are proud to claim the title
Of UNITED STATES MARINES.

Our flag's unfurled to every breeze,
From dawn to setting sun;
We have fought in every clime and place
Where we could take a gun;
In the snow of far off northern lands
And in sunny tropic scenes;
You will find us always on the job --
The UNITED STATES MARINES.

Here's health to you and to our Corps
Which we are proud to serve;
In many a strife we've fought for life
And never lost our nerve;
If the Army and the Navy
Ever look on Heaven's scenes;
They will find the streets are guarded
By UNITED STATES MARINES.


That's the US Marine Corps Silent Drill Team in action. 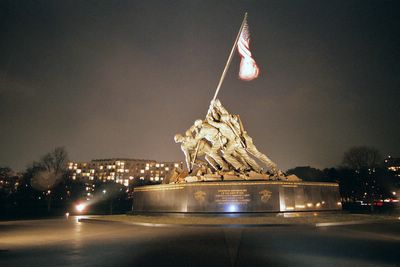 Forever remembering the sacrifices made by the Marines in far flung places around the world.


Also, I want to take this opportunity to once again remind my readers of Project Valour IT's fundraising efforts. I use this space to help raise funds for the Marine Corps team, they've had our backs. Now, it's time to have theirs. Project Valour IT, in conjunction with the Defense Department, provides voice-controlled software and laptop computers to wounded Soldiers, Sailors, Airmen and Marines recovering from hand and arm injuries or amputations at major military medical centers.

The Marine Corps, the smallest of the armed services branches, and continues to be in second place in raising funds for this worthy cause. Second place is not enough. Marines don't take second place to anyone. It's time to change this.

The Donovan said it quite well:

This particular effort is a friendly competition between the various branches of the US Armed Forces. While the US Marines is the smallest of the four branches, they are at the tip of the spear. Holly Aho is running the Marine campaign, and anyone who donates through my blog will be able to contribute to the Marine campaign effort. This is the same team that I've sponsored (and donated money to) each year since the project started, so get at it!

Goal: The goal of the Project Valour-IT 2007 fundraiser is to raise $240,000 total ($60,000 per team), which will go to purchase new laptops with voice activated software for our wounded soldiers with hand and/or arm injuries.

Please note "Marine Valour-IT Team" on your check so we get credit for your donation, because we want to WIN this thing!

Thank you and Semper Fi!

I will maintain a link to this in the sidebar for the duration of the fundraising, which ends Veteran's Day, November 11, 2007.

Labels: Project Valour IT, US Marines
Email ThisBlogThis!Share to TwitterShare to FacebookShare to Pinterest