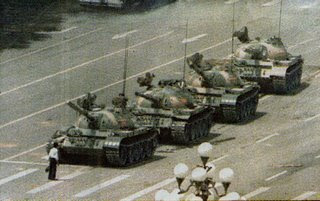 Today marks the 18th Anniversary of the Tiananmen Square crackdown by the Chinese against protesters. That bloody crackdown included thousands of arrests, with many never to be heard from ever again.

The Chinese government has made it quite difficult, if not impossible, for the Chinese to learn about what happened at Tiananmen Square. They've blocked searches on the subject and do not teach it in school.

The situation today is no different than it was one year ago.

UPDATE:
I've added photos and a video showing the courageous single young man who held up an entire column of tanks simply by standing his ground:

That man's identity has never been conclusively determined. His whereabouts are likewise unknown, but most human rights groups believe he was imprisoned and killed.

This video shows the violent crackdown in action: