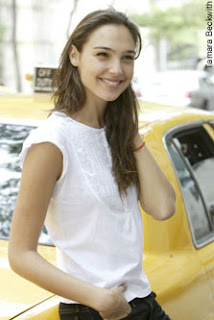 I reported yesterday that the outrage over Gal Gadot's posing for an ad campaign that included an event at the Israeli Consulate in New York City last night was overblown.

Still, Gadot felt that she had to come forward and issue a statement:

The stunning former Miss Israel and model, Gal Gadot, said she is proud of her sexy photograph - part of a new tourism campaign touted by the Israeli Consulate that show cases a host of scantily clad Hebrew hotties.

"Obviously, I don't think it's pornographic, or I wouldn't have done it," said Gadot, 22, who's starting law school in the fall.

She added, "Everyone is entitled to their own opinion. Israel is a democracy and that's what it's all about."

Her picture appeared on an official invitation sent out by the consulate in New York. It touched off an uproar in Israel, where several female politicians denounced it as the wrong way to promote the Jewish state.

The invite was for a Maxim magazine party last night at Chelsea hotspot Marquee to hype its July issue showcasing "Women of the Israeli Defense Forces."

"I'm not involved in politics," said the 5-foot-9 beauty. "I leave that to the politicians."

"This is the first time we used the word 'shoot' in connection to Israel and we're not talking about killing people," Mekel quipped about the photo shoot.

UPDATE:
Via Amos, here's a video of Gal: