Can anyone see what's wrong with this photo, if anything? Charles at LGF thinks that there's something fishy with the smoking rising from one of the buildings on the left side. I think he's definitely on to something. Something is definitely fishy. 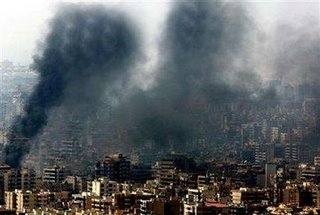 This photo is just as it appeared on the Yahoo feed of Reuters images.

If you've looked at other images of smoke from explosions and such, you'd be hard pressed to find such a repeating image. Has Reuters enhanced a photo for effect? I post, and you decide.

UPDATE:
Charles, Left and Right, and others are poking all sorts of holes in this particular image that was published by Reuters ostensibly showing smoking billowing from from Israeli airstrikes in Beirut. Beats me why Reuters thinks that they need to make the explosions and smoke seem even more ominous than they are.

Ace has previously noted that the big media outlets were cruising for a bruising by relying upon local stringers who had questionable journalistic ethics (and that's as compared with the usual level of competence in the media). Reuters definitely needs to explain itself here.

Giving itself and its photographers prizes for coverage will not do when the coverage itself is not what it appears to be.

UPDATE:
Well, there is more than one person who could have photo edited the image before publication. Starting with the photographer, Adnan Hajj, and moving up the food chain to ultimate publication, there's the individuals he dealt with at Reuters, photo editors, and finally someone at Yahoo who could have edited the image by adding in additional materials. The edits could have been done at any stage. If it happened within Reuters, there's an even bigger problem than if Hajj passed off the photo.

Hajj could have been trying to make his photo more saleable, since lots of smoke adds a dramatic effect to the shot. This was about trying to sell an image, but points to problems in factchecking and ensuring that accurate information is published.Hot Air has more on the story, and makes the following observation:

I don’t think this is evidence per se of bias, either. Like I said: if you’re going to gamble your career on a photoshopped image, why do it for something as innocuous as a smoke plume? There are a thousand images of bombs going off on Yahoo News at the moment. No one would have noticed this one if not for the shoddiness of the manipulation. A cameraman with an agenda would be painting bruises on dead kids at Qana, not making a black cloud extra billowy. I bet what happened is that he got sent to cover the airstrikes in Beirut, came away with nothing but bad shots, and made a poor choice in a moment of desperation. Nothing necessarily political about it.

Ace wonders just how big a story this is, and it calls into question how these things can keep happening to a media that supposedly factchecks the information it publishes. We're dealing with a very small number of photojournalists (in fact one guy) who keeps coming up with photos of incidents that have questionable provenance - whether they were invented, exaggerated, or posed.

Others questioning the photo include Ed Driscoll who'd like additional evidence (would a couple of flashing gifs do?) and My Vast Right Wing Conspriacy.