The rallies have been mostly peaceful (and why shouldn't they be peaceful?). Michelle Malkin has a big update/roundup. In my particular corner of NYC, I saw one group of demonstrators holding hands outside a building on Hudson St. About 75 people in that gaggle.

Elsewhere, outside PS-3 in the West Village, a group of kids were outside demonstrating as well. Apparently their teacher made this some kind of assignment as the kids were holding up hand drawn pictures of various flags from around the world, and were chanting "immigrants are here to stay, hey hey, ho ho..."

I'm also concerned about teachers using their position as a bully pulpit to indoctrinate kids who are too young to know the difference or question the distinction between legal and illegal aliens. But that's just me.

UPDATE:
No mass chaos and apparently the US economy chugs along despite the fact that the illegal immigrants and their supporters have taken the day off. Ace also points out that the illegal aliens are taking jobs that American teens used to do, which helps explain why unemployment among that sector is up.

Actually, I'd like a clarification on whether these folks have actually taken the entire day off or just going out on their lunchbreaks. It doesn't even appear as though many have taken the day off, instead using their lunchtime to support the cause.

Others blogging: bRight and Early, Hot Air, and more to follow...

UPDATE:
Apparently, some communities are more affected than others. Camden, Bound Brook, and Trenton have seen some businesses close and traffic down. Things that make you go hmmmm..

UPDATE:
Reports from around the country continue to come in about how large the crowds were, who was attending (well, not really - as knowing who was attending would give away who organized these demonstrations and would show that ANSWER and various socialist and communist front groups were deeply involved in today's events, which coincidentally occurred on May Day, the traditional communist holiday.

Meanwhile, Mexican unions are calling for a boycott of American goods. That will really go over well. Memeorandum has more on the political fallout and how politicians are trying to split hairs over their positions on the matter of border control and immigration.

Gothamist has more on the NYC demonstrations, including links to photos. I'll be looking those over when I get a chance and see if anything interesting pops up. The rallies are still ongoing so if you're in the area around Broadway below 23rd Street, you'll be in the thick of it.

UPDATE: Here's the link to the Gothamist coverage. Flopping Aces has a lengthy post with a roundup of reaction from around the country. Ed Driscoll notes that ANSWER is planning yet more demonstrations tomorrow (they were behind many of the protest marches today). Do many of the people involved in the marches know who is organizing these marches, and would they still be involved if they did?

Tel Chai Nation notes that Muslims are against immigration enforcement. Curious. Very curious. Kim at Wizbang notes that some in Congress may be getting it - wondering why ICE isn't taking a more aggressive stance in investigating cases where businesses have been forced to close because they may be employing illegal aliens who demonstrated today.

The Politicker has photos of some of the protestors in around Milwaukee, WI.

Stop the ACLU notes that the founder of the Minutemen is mulling running for President.

Jim Gilchrist, the founder of the Minuteman Project, is considering a run for president in 2008 with the Constitution Party.

Gilchrist has just returned from Florida where he met with the party’s national committee.

Chairman James Clymer told WorldNetDaily the party was excited about the possibility of Gilchrist as its marquis candidate.

“Yes, indeed we are interested,” Clymer said. “Gilchrist spoke to us last weekend in Tampa and our people asked Jim then if he would be the candidate. We think it would be wonderful if Jim Gilchrist would seriously consider being our presidential candidate.”

Gilchrist told WND the only candidate he would support as the Republican Party presidential nominee in 2008 was Rep. Tom Tancredo, R-Colo.

“If John McCain enters the race for president,” Gilchrist said. “I will definitely run. John McCain should have forfeited his right to run for President on the Republican Party the moment he put his name on immigration legislation with Sen. Ted Kennedy.”

Gilchrist and the Constitution Party both agree on the need to secure our southern border with Mexico. Commenting on the street demonstrations planned on May 1, Gilchrist said they are nothing more than “a declaration that we are no longer a nation governed by the rule of law, but that we are being ruled by mob rule.”

Asked whether he felt President Bush’s “guest worker” program or the administration’s “pathway to citizenship” were reasonable compromises, Gilchrist reacted sharply: “The Republican Party is going to pay a huge price for pandering to what they think is going to be an illegal-alien vote and for their reckless disregard for the rule of law. The Republican Party has sold out our sovereignty.”

Others blogging generally on the immigration demonstrations: All Things Beautiful has an oldie but goodie, Iowa Voice, Outside the Beltway, and bRight and Early. 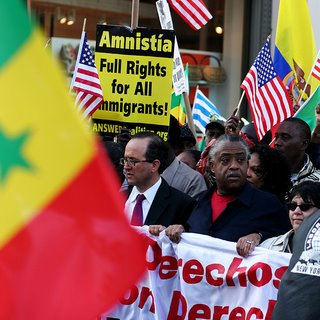 And Al Sharpton was at today's march in NYC. He's getting lots of exercise these past few days - having taken part in the march across the Brooklyn Bridge in support of Roger Toussaint (who led TWU 100 on an illegal strike against the MTA - shutting down NYC buses and subways right before Christmas), marched in support of action on Darfur, and now marching in support of illegal immigration. Specifically, note the banners right behind him calling for Amnesty and printed by ANSWER.

They keep calling this a day without immigrants. Sorry, but that doesn't wash. This was a day where fringe groups were pushing an agenda that seeks to subvert and undermine US sovereignty by pushing for rights for illegal aliens.
Posted by lawhawk at 5/01/2006 12:54:00 PM