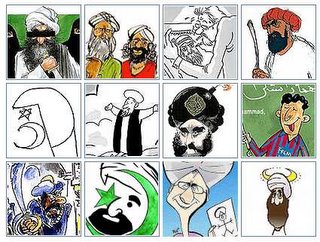 Michelle Malkin has a pretty large roundup, lots of quotes, and links, including about an International Day of Anger. Freedom of speech. Gotta love it. Outrage continues to grow, and even some US national media outlets are slow to pick up the story - or broadcast the actual images of the cartoons.

Powerline has more, including a statement from Nasrallah who gives away the game - it's about terrorism, not religious piety:

Everything that reasonable people need to know about the cartoon uproar is embodied in the comments of yesterday of Hassan Nasrallah, leader of Hezbollah. He said: "If there had been a Muslim to carry out Imam Khomeini's fatwa against the renegade Salman Rushdie, this rabble who insult our Prophet Mohammed in Denmark, Norway and France would not have dared to do so."

And that is it, isn't it? He's given away the game. This is not piety or religion or offense-taking. It is terrorism.

Rushdie had published the book Satanic Verses, which resulted in a fatwa calling for Rushdie's death. Rushdie was forced to live with heavy security for several years. Bookstores were firebombed and his book was burned in demonstrations around the world. Are we about to see that whole ugly scene revisited? It certainly seems that way.

UPDATE:
Don Surber notes that these cartoons were first published in September. Something's fishy about this whole thing.

UPDATE:
The US State Department has come down with the "yes, buts" in responding to the growing crisis in Europe over those cartoons. You see, while there's something known as free speech, these cartoons are offensive and the media should observe some responsibility.

“We all fully recognize and respect freedom of the press and expression BUT it must be coupled with press responsibility,” Higgins told AFP. “Inciting religious or ethnic hatreds in this manner is not acceptable. We call for tolerance and respect for all communities and for their religious beliefs and practices.”

Meanwhile, the demonstrators are showing you exactly where they're coming from, and what they want. Come on. Don't be shy. Tell us exactly what you want to do. Oh, wait. They are. It's just the big media outlets that aren't exactly transmitting what these guys want to have happen. These folks are busy expressing their freedom of speech, but it differs from the cartoonists or the papers that carried them. These guys would much rather kill and bully their opponents into silence or subjugation.

UPDATE:
Lots of stuff going on. Bryan Preston shows the hypocrisy of the Islamists - they're completely reliant on Western technology (a Nokia cellphone for instance) to send their message around the world and coordinate their demonstrations against the cartoon publications. Ed Driscoll who notes the deference given to Muslims by various US media outlets and compares it to the way that artists who defiled images sacred to Christians were not only reprinted, but brought in to do additional work. Cathy Seipp has an interesting observation. Wretchard weighs the possibility that the cartoon mess and how it affects the war on terror.

Others blogging: Hugh Hewitt, bRight and Early, Laurence Simon, Dr. Sanity, The Jawa Report, ShrinkWrapped, Wiggly, and Outside the Beltway.