Last night's episode of 24 was okay, but the Blogs4Bauer recaps and livebloggings were far more entertaining than the first 50 minutes. All the action was packed into that last 10 minutes, and someone ought to get CTU a dedicated mole hunter. Jack Bristow perhaps? He knows the business from both ends as Spy Daddy on Alias.

That brings me to the next point: Jack Bristow vs. Jack Bauer. Jack v. Jack. Kinda like Alien v. Predator except the guys are easier to look at. Both have killed with everything from phones to screwdrivers (and Jack has even managed to use a screwdriver for its intended purpose when putting together a crib for his daughter Sydney). We've seen Bristow kill with looks. Bauer with phones.

My guess is that WTC will bomb, but Flight 93 will be more successful. Modest business for both - and both will do better on DVD than in the original bigscreen release.

CNN also put Flags of our Fathers in the "sounds promising" category. I'm sorry, but with a best seller nonfiction book and Clint Eastwood behind that project, it has Oscar potential all over it. 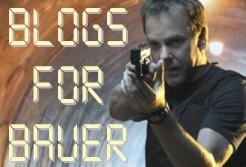