A few weeks back, an Iranian missile-testing site at Bid Kaneh was rocked by a tremendous explosion that damaged the facility and killed workers associated with the missile program. New details have emerged about the base, which is located near Tehran, and what may have happened.

In interviews, current and former officials said surveillance photos showed that the Iranian base was a central testing center for advanced solid-fuel missiles, an assessment backed by outside experts who have examined satellite photos showing that the base was almost completely leveled in the blast. Such missiles can be launched almost instantly, making them useful to Iran as a potential deterrent against pre-emptive attacks by Israel or the United States, and they are also better suited than older liquid-fuel designs for carrying warheads long distances.

It is still unclear what caused the explosion, with American officials saying they believe it was probably an accident, perhaps because of Iran’s inexperience with a volatile, dangerous technology. Iran declared it an accident, but subsequent discussions of the episode in the Iranian news media have referred to the chief of Iran’s missile program as one of the “martyrs” killed in the huge explosion. Some Iranian officials have talked of sabotage, but it is unclear whether that is based on evidence or surmise after several years in which Iranian nuclear scientists have been assassinated on Tehran’s streets, and a highly sophisticated computer worm has attacked its main uranium production facility.

Both American and Israeli officials, in discussing the explosion in recent days, showed little curiosity about its cause. “Anything that buys us time and delays the day when the Iranians might be able to mount a nuclear weapon on an accurate missile is a small victory,” one Western intelligence official who has been deeply involved in countering the Iranian nuclear program said this weekend. “At this point, we’ll take whatever we can get, however it happens.”

In addition to providing a potential deterrent to attackers, Iran’s advances in solid-fuel missile technology, and the concern it could eventually have intercontinental reach, have been at the heart of the Obama administration’s insistence on the need for new missile-defense programs.

Here's a photo of the base before the explosion: 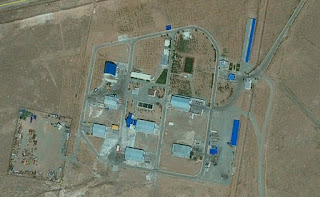 Here's a photo of the base following the explosion: 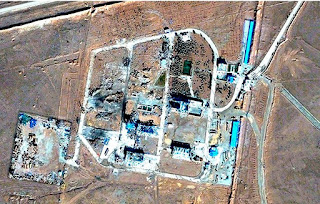 You can see significant damage to multiple structures, including two that look to have been completely obliterated by the explosion. The facility was apparently testing solid-rocket technologies, and no one seems to know what happened. There's some speculation that sabotage may have played a role, or that a US UAV strike hit the base, but that is mere rumor and unsupported by any evidence - even from an Iranian media that has no problem proffering bogus information as news (such as claiming it shot down US unmanned vehicles, or reporting that the US is carrying out more UAV airstrikes than has been reported - using the same information in each of the reports).
Posted by lawhawk at 12/05/2011 12:55:00 PM