For the first time, the IAEA has unequivocally stated that Syria was in the process of building a covert nuclear reactor at a site destroyed in a presumed Israeli airstrike in September of 2007.

By aligning the IAEA with the United States, which first asserted three years ago that the bombed target was a nuclear reactor, the comments will increase pressure on Syria to stop stonewalling agency requests for more information on its nuclear activities.

Amano spoke during a news conference meant to focus on the Fukushima nuclear disaster after a visit to the Paris-based Organization for Economic Cooperation and Development to discuss clean-up efforts at Japan's tsunami-ravaged nuclear plant.

Previous IAEA language has been more circumspect. In a February report, Amano had said only that features of the bombed structure were "similar to what may be found at nuclear reactor sites."

Israel has never publicly commented on the strike or even acknowledged carrying it out. The U.S. has shared intelligence with the agency that identifies the structure as a nearly completed nuclear reactor that, if finished, would have been able to produce plutonium for the fissile core of nuclear warheads.

In 2008, the Bush administration released images of the site that had been taken prior to the Sept. 6, 2007 strike [ed: added link to Time's publication of those images]. The New York Times reported at the time that the undated photos, taken inside the reactor, showed the rods responsible for controlling heat inside a nuclear reactor. The report said the engineering was similar to that of a North Korean site, and that one of the images showed the manager of North Korea's Yongbyon nuclear plant at the location with Syria's top nuclear official.

The timing of this news may be an attempt to increase pressure on the Syrian regime, but I doubt that it will do much to stop Assad from cracking down on dissidents within the country.

Syria was caught with its hands in the proverbial nuclear cookie jar and couldn't open the site up for inspection at the time of the attack because it would have revealed the extent of the Syrian nuclear program. That's why the Syrians didn't play up the airstrike in the international media or even in domestic agitation towards Israel because it would have resulted in even stronger sanctions by the UN, IAEA, and the US. 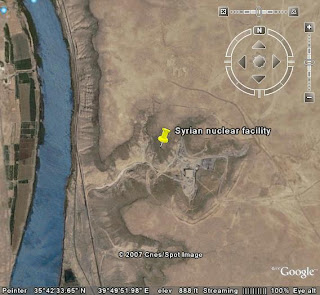 So, while the Syrians admitted that the airstrike damaged some portion of Syria's nuclear infrastructure, they weren't about to let on just how badly damaged their nuclear program was as a result of the airstrike.

The regime's stonewalling of the IAEA and UN to investigate the site meant that the Syrians could scrub the site of useful information and delaying access meant that the IAEA couldn't view the scene as it was when the airstrike took place. Yet, the IAEA was still able to conclude that the Syrians were working on a clandestine nuclear reactor when Israel blew it up before it could become operational.
Posted by lawhawk at 4/28/2011 02:25:00 PM