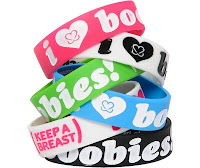 A federal judge has sided with student groups that sell bracelets indicating that they love boobies as part of fundraising for cancer research in a lawsuit against school districts that had banned the bracelets.


“I Heart Boobies” bracelets are sold across the nation and have been banned in many U.S schools, including Oceanside High School, Valley Middle School in Carlsbad and Mountain Empire High School in East County.

U.S. District Judge Mary McLaughlin sided with students Tuesday in a free-speech test case filed in Pennsylvania by the American Civil Liberties Union. She issued a temporary injunction that bars the Easton Area School District from enforcing its ban.

Some schools had banned the bracelets claiming that they were distracting and full of sexual innuendos. The judge got this one right.
Posted by lawhawk at 4/13/2011 03:35:00 PM