The Rebuilding of Ground Zero, Part 119

Work continues all around Ground Zero as the Freedom Tower (1WTC) is approaching the height of nearby 7WTC at a rate of about 3 stories per week. The steel is being erected in three story increments, which means that the tower should be nearing 900 feet by the end of the year. 4WTC, which is diagonally across from Ground Zero is also rising, but at a somewhat slower pace. 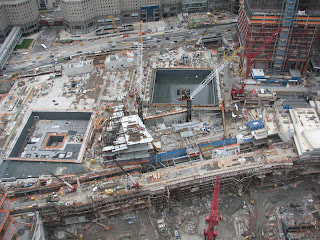 The North Memorial Pool has been filled and the waterfall curtain walls are being tested. Trees are continuing to be planted around the memorial site and will soon ring the memorial pools.

Meanwhile, the former Deutsche Bank building continues to linger as unexpected difficulties in tearing down the remaining six stories have added to the delays. The sixth floor turned out to be particularly difficult to demolish because it was a mechanical floor, and was heavily reinforced making it more difficult to tear apart.

Also, Judge Hellerstein has again delayed the due date for the Ground Zero workers compensation fund by a week to allow lawyers more time to get 95% of the class to approve the $712 million package.

In order to collect on the $712 million settlement, 95 percent of the 10,000 plaintiffs had to join up and file notarized paperwork by 11:59 Monday night.

But with just hours to go, the judge presiding over the suit issued a gag order meaning neither side could say if the threshold was hit until all the paperwork had been processed, something that could take a few more days.

Manhattan federal Judge Alvin Hellerstein cited the "huge influx" of people joining as the deadline approached saying it "taxed the capacity to process" them on time, according to the New York Post.

They now have until Thursday afternoon to finalize the paperwork, according to the New York Times.

The lawsuit was filed on behalf of thousands of workers who said they were sickened from cleaning up after the Sept. 11 attacks without proper protective gear or supervision by the city.

UPDATE:
Here's video of the tests via the NY Times: