Today there was an anti-war rally in Manhattan. The usual suspects were involved, incluing United for Peace and Justice and ANSWER, both of which are anti-American to the core. Via Gothamist.

Among the photos that sum up this particular rally: 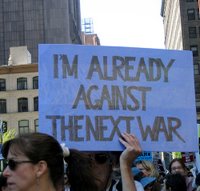 Somehow, I doubt that the terrorists think that we're not in a long term war. They think of their jihad against the west in terms of decades, not hours and days.

Seeing how this particular march was occurring no more than a few miles from Ground Zero, someone has some serious myopia - and a little BDS to boot.

UPDATE:
Welcome Michelle Malkin and LGF readers. Malkin has a couple of additional photos from the march, and the one that features Cindy Sheehan, Al Sharpton, and Jesse Jackson, also happened to include TWU Local 100 Union president Roger Toussaint, fresh from his stint in jail after doing time for leading the union into an illegal strike against the MTA back in December. Gotta love the company he keeps.
Posted by lawhawk at 4/29/2006 07:28:00 PM