I've been operating a small sales concession on Cafepress for the past couple of years, and this photo is the big seller: 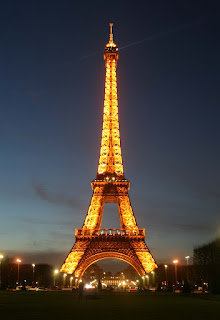 It's the incomparable Eiffel Tower at night. Since it was built for the Paris Exposition of 1889, no structure in Paris has exceeded its height. It is a source of inspiration, romance, and the official symbol of France and Paris, despite the fact that it was widely reviled after its construction and some sought to demolish it early after its permit for operation expired in 1909. It always helps to get beautiful light to enhance an already majestic vista.

If you like it, or think you'd like to buy some of my other photos - either as wall art or as covers for your cellphones, check out my CafePress shop.