Curiosity Lands Safely On Mars After 7 Minutes of Terror

The NASA Mars mission Curiosity has landed safely on Mars.

This is perhaps the photo of the mission - it shows the Curiosity lander as it cuts through the Martian atmosphere with its huge parachute unfurled. It was taken by the Mars Reconnaissance Orbiter from about 300 miles away.

Curiosity is a mobile platform enabling exploration over a wide area. The mission is expected to last more than a year.


Curiosity is the biggest and most capable robotic laboratory ever sent to another celestial body: Its 10 scientific instruments are designed to study the chemistry of Mars' rocks, soil and atmosphere and determine whether the Red Planet had the right stuff to be habitable in ancient times.

The rover's prime target is a 3-mile-high (5-kilometer-high) mountain inside the crater, known as Aeolis Mons or Mount Sharp. The mountain's layers of rock could preserve billions of years' worth of geological history, shedding light on the planet's transition from its warmer, wetter past to its current cold, dry climate.

Some scientists think Curiosity could even detect the signs of present-day life, although NASA doesn't go that far. 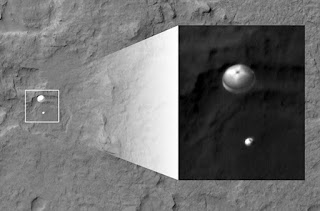