The Rebuilding of Ground Zero, Part 159

Today, the Freedom Tower (1WTC) will regain the title of the tallest skyscraper in New York City. It will soar more than 1,250 feet above the street, eclipsing the Empire State Building.


Crowning the world's tallest buildings is a little like picking the heavyweight champion in boxing. There is often disagreement about who deserves the belt.

In this case, the issue involves the 408-foot-tall needle that will sit on the tower's roof.

Count it, and the World Trade Center is back on top. Otherwise, it will have to settle for No. 2, after the Willis Tower in Chicago.

"Height is complicated," said Nathaniel Hollister, a spokesman for The Council on Tall Buildings and Urban Habitats, a Chicago-based organization considered an authority on such records.

Experts and architects have long disagreed about where to stop measuring super-tall buildings outfitted with masts, spires and antennas that extend far above the roof.
Consider the case of the Empire State Building: Measured from the sidewalk to the tip of its needle-like antenna, the granddaddy of all super-tall skyscrapers actually stands 1,454 feet high, well above the mark being surpassed by One World Trade Center on Monday.

That's based on the measure of street to roof. It doesn't count antennas or pinnacles. By those measures, the Empire State Building will still be the tallest in New York City for at least another nine months or so at 1,454 feet - until the Freedom Tower's 409 foot antenna is completed. With the antenna, it would push the tower to 1,776 feet, rising above the North American record holder of the Willis Tower in Chicago (at 1,729 feet including its antennae). 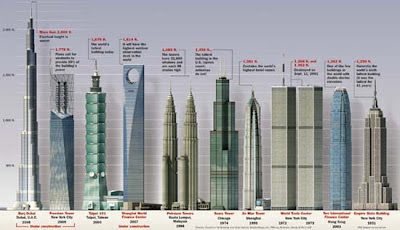 Based on height to the roof, the Willis Tower would still be the tallest tower in North America, at 1,450 feet as compared with the 1,367 feet for the Freedom Tower. While the previous image shows an earlier incarnation of the Freedom Tower that was discarded in favor of the current design, the height will still top out at 1,776 feet.

Despite the ultimate height of 1,776 feet, it will still be nearly 1,000 feet shorter than the current world record holder - the Burj Kafila in Abu Dhabi, which has become the center of super-tall skyscraper construction and innovation in the past decade.

There is SHOCKING news in the sports betting world.

It has been said that any bettor needs to look at this,

Watch this now or stop betting on sports...