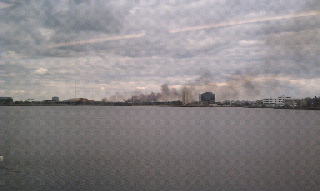 UPDATE:
That's a photo of the brush fire still burning near the MetLife Stadium and Meadowlands sports complex. The smoke can be seen from miles away and while it wasn't affecting NJ Transit, it was affecting several local highways, including Route 130. Traffic helicopters were out in abundance covering this latest brush fire in the area, which follows several other major fires on Long Island, Staten Island, and New Jersey.

With a lack of rain dating back to January 1, emergency officials across the region are bracing for still more fires to break out due to the extremely dry conditions.
Posted by lawhawk at 4/11/2012 05:36:00 PM

Searching for the Best Dating Site? Create an account to find your perfect match.

If you want your ex-girlfriend or ex-boyfriend to come crawling back to you on their knees (even if they're dating somebody else now) you must watch this video
right away...

(VIDEO) Why your ex will NEVER get back...