Newark, New Jersey hosted the funeral of singer and actress Whitney Houston today a week after she was found dead in a hotel room in Los Angeles. The funeral was a closed affair, but was streamed online for the public. Police had cordoned off the area in anticipation of the crowds that were sure to come out to pay their respects.

Also claiming to come out to show their hate: the Westboro Baptists. However, it appears that they did no such thing:

... they broke the Ninth Commandment when Margie Phelps, the daughter of church founder Fred Phelps, tweeted a photo purporting to show the church's protest in front of Whitney Houston's funeral in Newark. However, reporters for the Star-Ledger "confirmed no active protests were occurring in the place depicted by the photograph."

Here's the photo in question: 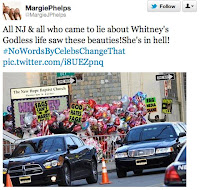