An iconic photo that has been published countless times in relation to the anniversary of the Pearl Harbor attacks may not be all that it's cracked up to be. MSNBC has apparently gotten to the bottom of a photo depicted a group of women firefighters at Pearl Harbor. 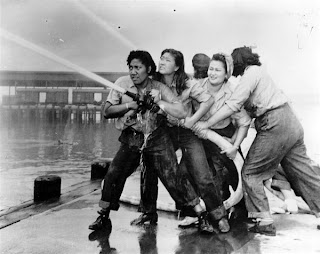 It turns out that while there were indeed women firefighters who were tasked with that arduous duty, according to one of the women, the photograph was not taken during the day of the attacks.

Lowe said the wartime photo was certainly not taken on Dec. 7, 1941, the day the Imperial Japanese Navy shocked the United States into joining World War II. On that Sunday morning she was headed to church when the bombing started, and she went ahead anyway because she wasn't sure what else to do. But she and her friends from the Dole pineapple factory did soon go to work as civilian workers at the Pearl Harbor Naval Shipyard, and one of their duties was to fight fires. She said the photo was probably taken at a training exercise during the war. She said she had no idea that her photo was in history books.

So the bottom line: These women were female firefighters at Pearl Harbor, the place. To that extent the photo is authentic. But they weren't fighting a fire when this photograph was taken, and they weren't fighting any fires on Dec. 7, the day we remember every year on Pearl Harbor Day. In addition to Lowe's account, there is strong documentary evidence that this is a Navy publicity photo taken to showcase the roles of women during the war.