A Trip of Extremes

A few weeks back, I had the opportunity to travel to Death Valley and Sequoia/Kings Canyon National Parks by way of Las Vegas. Along the way, we got to experience some of the most extreme conditions and phenomenon in the Western Hemisphere and the world. We also ended up putting more than 1,700 miles on two cars over little more than a week (200+ miles on a Jeep for offroading in Death Valley).

Death Valley is the lowest spot in the Western Hemisphere, with Badwater being 282 feet below sea level. Yet, just 85 miles away, the tallest spot in the lower 48 states is Mount Whitney at more than 14,505 feet (located in Sequoia National Park). 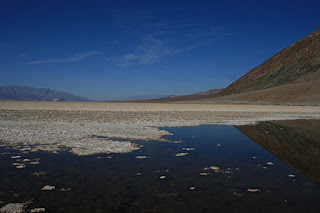 That's a huge variation in terrain and it makes for some wondrous vistas.

Death Valley is amazing for wide range of terrain within the park, from dry salt beds, playas, to badlands and mountains. It has its own Joshua tree forests and scrub brush. It has volanoes and sand dunes. Many of the following photos are composite images stitched together to convey the grandeur of the sights.


From Death Valley, we drove through Lone Pine and visited Manzanar National Historic site, which was one of Japanese internment camps during World War II.

We then drove over to Barstow, from which we traveled through Visalia and fruit groves to Sequoia and Kings Canyon National Parks. There's no real way to convey the size of the massive giant sequoias that are found no where else on the planet. They are larger than buildings found across much of the country and had branches that were bigger than the 90 foot tree I recently had to take down on my property because it was threatening to fall:

We stayed at Wuksachi Lodge in Sequoia Park, and that's probably your best bet if you want to stay in the area and experience as much of the park as possible. The restaurant has good food at a reasonable price, and it's the only year-round lodging in the park. There are campgrounds and several other lodging options available, but this is the premier location in the park (the National Park Service previously had lodging in and among the giant sequoias, but that was doing too much damage to the trees so they relocated the lodging and restored the area).

Finally, before returning to Las Vegas, we stopped at Red Rocks Canyon National Conservation Area, where we got to take in the light and scenic vistas before heading home: