The Chinese government purchased a former Soviet aircraft carrier that had never been completed (Varyag) and spent several years wondering what to do with it before deciding to refit it and prepare it to become the country's first aircraft carrier.

It's now undergoing sea trials and a DigitalGlobe satellite found it through the cloud cover. 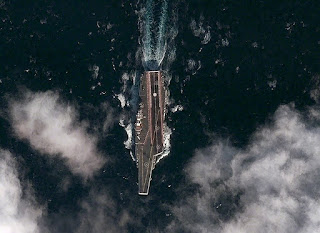 Experts have been hoping for months to get a glimpse of the aircraft carrier at sea. The former Soviet Union started building the ship, originally known as the Varyag, but never finished it. After the Soviet breakup, the Varyag ended up in the hands of the Ukrainian government. The ship was auctioned off to the Chinese in 1998. Since then, the Varyag, which has reportedly been rechristened the Shi Lang, has been under refurbishment for sea service.

The ship is slightly shorter than a typical US fleet carrier (Nimitz or improved Nimitz class) (1,000 feet as opposed to 1,092), has a significantly smaller displacement (30,000 tons versus 100,000+ tons, and it is conventionally powered as opposed to the nuclear powered US carriers; the conventionally powered ship required more frequent refueling and reduces its operational tempo). However, this gives the Chinese government the ability to learn how to utilize such ships going forward and may pave the way for additional carriers to be built in the future.

However, the Chinese carrier does pose a more immediate threat to countries like Taiwan, Japan, South Korea, or India, each of which has regional interests that overlap China.
Posted by lawhawk at 12/15/2011 10:25:00 AM