The Rebuilding of Ground Zero, Part 151

The Freedom Tower (1WTC) is now fast approaching 100 stories, and should top out at over 1,300 feet in the first quarter of next year. 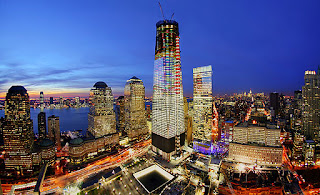 The problems are elsewhere on the site - the WTC National 9/11 museum construction work has come to a standstill over money.

The Port Authority says the memorial and museum foundation owes it millions.

The foundation sees it exactly the other way around.

The mayor, who is also foundation chairman, added we have an obligation to make sure that the people who contributed something like $425 million have the memorial and museum built the way they thought it would get done.

Once again, we see the Port Authority fighting with those who are trying to get work done around the site. It's a fight over some $300 million in work that has to be completed before the museum can be opened to the public. Mayor Bloomberg claims that the Port Authority has cut off payments to workers, halting construction, and it would appear that the number of workers on site have declined sharply.

“Construction has come basically to a halt,” the mayor told reporters at an unrelated press conference in The Bronx, disputing the Port Authority's math.

“We don’t think we owe anything," he said. "In fact, we think that the Port Authority actually owes us something like $140 million."

“We are in active negotiations with the city, but construction is ongoing at the Memorial,” he said.

An official familiar with the construction who spoke on the condition of anonymity said there is some work continuing on the site, but that the ranks of workers have dwindled from hundreds to several dozen.

The dispute has become so heated that Gov. Andrew Cuomo, who revealed the cost hike during a radio interview Thursday, said the two sides could wind up in court.

It “is so bad they’re on the verge of litigation, believe it or not,” he said.


So, who owes who the money involved at the heart of the dispute? I can't really tell.

However, there's a looming mess over how the operating budget for the museum will be conducted and whether the museum will have to charge patrons for viewing the museum. It's my longstanding position that the museum should be free to all, and that costs should be recouped from tour bus and parking fees (as done at other venues such as Mount Rushmore).
Posted by lawhawk at 12/16/2011 01:20:00 PM