Zuccotti Park Protests Continue, But Down At Wall Street....

The protests at Zuccotti Park by the Occupy Wall Street groups continue, and the press trucks are lined up as usual. What isn't typical is the pedestrian access in and around Wall Street itself. The NYPD has penned in the entire area with the ubiquitous barricades that have sprung up all over Lower Manhattan and they limit access to several of New York City's premier landmarks and tourist attractions. That's in addition to the restrictions in place since after 9/11.

Anyone trying to access the area now has to run the gauntlet.

You have to walk down and around Federal Hall to get to the other side of the street to view the New York Stock Exchange directly across the street. Police barricades prohibit access to the steps of Federal Hall itself, and to enter the famed building where George Washington took the oath as first President of the United States, you have to go around the back and enter through the rear of the building.

The steps are off limits to limit protests, but they have also limited access to one of the great buildings in New York City.


I thought this particular protester had some good ideas. This gentleman had a list of demands on how to improve the banking system. 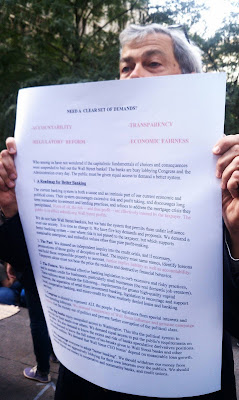 That contrasts with the nuttiness of protesters a few steps away.

Which do you think will get more attention? The latter, of course, but that doesn't diminish the importance and relevance of what the lone gentleman calling for improved banking regulation and transparency has to say.

Also, the public square around 1 Chase Plaza has been cordoned off by the owners/building managers of that site, which is near to Wall Street and Zuccotti Park, likely to prevent a similar encampment.


Published with Blogger-droid v1.7.4
UPDATE:
I went back today to check out some of the photos, and it turns out the protester complaining that Johnson and Johnson was murdering people was an anti-fluoride loon. He thinks that J&J was murdering people with dental floss and anti-cavity rinses.