The Rebuilding of Ground Zero, Part 132

The 9/11 Memorial Museum Pavilion is starting to get glassed in.

The Freedom Tower is closing in on about half of its ultimate height of 1,776 feet, and it appears that the eight sides of the tower due to the inverted triangle sides is reaching its halfway point. Also, glass cladding has been erected on the first 15 floors that will be leased.


Another view of Ground Zero - as viewed from the Church Street side: 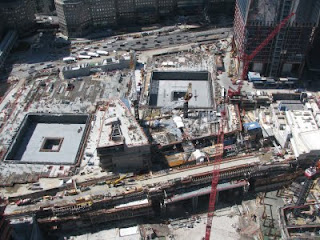 Construction is proceeding all throughout Ground Zero, and one can see the beginning of work on foundations for 2WTC, or the support structure that will go where 2WTC belongs when it is ultimately built (bottom right corner). Work on the transit hub is also continuing, and the large crane in the center of the screen is working on lifting the heavy steel used in that portion of the project.

With the 10th anniversary fast approach, other communities are looking to get their own memorials and commemorations underway, including in Weehawken, New Jersey. The Arizona 9/11 memorial continues to receive flack over its design and inclusion of various terms and phrases:

Legislation proposed for consideration by a Senate committee today would require removal of panels bearing 11 inscriptions that a supporter of the measure said are “offensive” and that detract from the memorial’s purpose in honoring those killed and injured in the 2001 terrorist attacks.

“Instead of it being a true patriotic memorial to dead and wounded, other agendas were ... trying to arouse American guilt and other things that many of us believe should not be there,” said Sen. Al Melvin, R-Tucson. “This has been a long-standing problem and I’m proud to be a party of legislators (working) to get his fixed once and for all.”

Inscriptions that would be removed include ones that say “Foreign-born Americans afraid,” “Must bomb back” and “You don’t win battles of terrorism with more battles.”

The state commission that raised private funding for the memorial and chose its design replaced two other inscriptions several years ago in response to criticism.

The inscriptions, which were submitted by the public, are etched into a steel visor that partially circles the memorial located at Wesley Bolin Memorial Plaza near the Capitol.

Billy Shields, a former Phoenix firefighters union leader who was chairman of the memorial commission, said the legislative proposal to change the privately funded memorial is outrageous.

“We had family members on our commission that had lost loved ones on 9/11. We had a broad cross-section of Arizonans — Republicans and Democrats — and we went out to the public when we changed it,” Shields said. “It was a process, and it would let all those people down and the process down to change it through legislation.”

The memorial was dedicated in 2006 on the fifth anniversary of the attacks and became an issue in the 2006 gubernatorial race between Democratic then-Gov. Janet Napolitano and Republican nominee Len Munsil.

Meanwhile, the 9/11 Memorial Foundation has leased the commercial space on the ground floor of a recently converted condo building directly to the south of Ground Zero to act as a screening center for three years. That's apparently irked the building's residents, even though there is no more logical place to handle the screening as construction restricts access to the site from other directions.

Until the site is completed, everyone in the vicinity of the complex has to deal with difficulties and crowds, which can only be expected to grow as the memorial, museum, and other components of the site are completed.
Posted by lawhawk at 4/21/2011 02:40:00 PM