The massive 8.9 earthquake that struck off the coast of Japan caused tremendous damage and the tsunami spawned by the quake roared throughout the Pacific Ocean, causing damage as far away as Oregon and California. Hundreds are dead in Japan and thousands are missing, particularly in the city of Sendai.

Yet, for all those concerns, a renewed tsunami warning as aftershocks continue rumbling off the Northeastern coast of Japan, a new and potentially more dangerous threat looms as one of the nuclear power plants in the area most affected by the quake may be in the process of a meltdown.

An explosion was captured on video at the Fukushima nuclear power plant and there's little information coming from the plant operator, Tokyo Electric Power Co, at this time so speculation is rampant. Radiation levels outside the plant have been above normal levels since the earthquake struck.

What we do know is that the operators have been having trouble since the quake hit in trying to restore coolant flow to the reactor core of the oldest reactor in the complex, which went online in 1970. Coolant flow is critical because even when a reactor is shut down, tremendous amounts of heat and energy are being released and has to be dissipated to keep pressures within the reactor from getting to critical levels.

Nuclear reactors are built to withstand earthquakes - but not necessarily to a quake the size of the one experienced yesterday, but the reactor that is the most likely to have been involved at the Fukushima plant was an older reactor and pressures within the reactor reached 2.1 times the design limit after initially rising 1.5 times. Add to the fact that the backup systems failed for a reason that has yet to be determined.

Yesterday, President Obama called the situation heartbreaking and pledged to provide all manner of humanitarian assistance:


To that end, the US has deployed a carrier task force to head to Japan to provide relief assistance, particularly helicopter assets that can help the Japanese reach hard hit areas that have seen roads, airports, and other infrastructure washed away.

UPDATE:
The Wall Street Journal reports that a building collapsed at the Fukushima power plant, but no indication on whether that was a reactor containment building or ancillary structure.

A portion of the reactor's fuel rods, which create heat through a nuclear reaction, had become exposed due to the cooling-system failure. The spokesman for Tepco said 1.5 meters of the 4.5 meter long fuel rods were exposed. It was unclear Saturday afternoon whether the water added by workers had re-covered the rods.

Loss of cooling water resulted in a near meltdown of the Three Mile Island reactor in Pennsylvania in 1979, the worst nuclear incident in U.S. history.

If coolant isn't restored, the result could be what's known as a meltdown -- extreme heat can melt through the reactor vessel and result in a radioactive release. Reactors have containment domes to catch any release. But there is always the chance that an earthquake could create cracks or other breaches in that containment system.

The Japanese government on Friday declared an emergency at the plant and ordered the evacuation of thousands of residents in the area. Officials steadily increased the evacuation perimeter Saturday, extending it to 20 kilometers Saturday evening.

By Saturday morning, some 20,000 people had been evacuated from the areas around the two troubled nuclear power plants in the Fukushima prefecture, according to Kyodo News.

Shortly after that, the government nuclear agency confirmed the radiation level at the gate of the plant was eight times as high as normal after some mildly radioactive vapor was released by the plant in an effort to ease pressure. Fukushima Daiichi has six reactors, all built in the 1970s, and three were operating when the quake happened. The No. 1 unit, the oldest and smallest of the reactors, appears to be the main source of the problems.

Asked about the impact of radiation at eight times higher than normal levels, Naoto Sekimura, a professor of quantum engineering at Tokyo University, said on national broadcaster NHK, "This is a minuscule amount. This is not going to have negative impact on the human body."

Inside the control room at Unit 1, the amount of radiation earlier Saturday reached around 1,000 times normal, the Nuclear and Industrial Safety Agency said, according to Kyodo.

Radiation levels aren't supposed to rise in a control room, which is designed to allow operators to continue working during emergencies and is equipped with filtration systems and other design features to protect workers from radiation exposure. Nevertheless, experts said that a level that is 1,000 times normal probably isn't immediately harmful.

UPDATE:
The explosion seriously damaged the containment building, but officials say that the inner reactor containment vessel was intact: Photos show the before and after view of the complex at Fukushima. 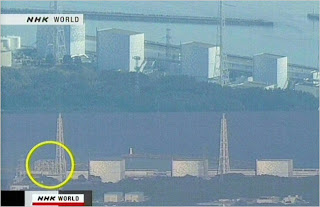 UPDATE:
Japanese officials are trying to figure out the situation at Fukushima, and are preparing for a worst case scenario by stockpiling iodine just in case, all while expanding the evacuation zone around the stricken plant.

UPDATE:
More details emerging on why the explosion took place at Fukushima.

"At this point, there has been no major change to the level of radiation leakage outside (from before and after the explosion), so we'd like everyone to respond calmly," Edano said.

"We've decided to fill the reactor container with sea water. Trade minister Kaieda has instructed us to do so. By doing this, we will use boric acid to prevent criticality."

Edano said it would take about five to 10 hours to fill the reactor core with sea water and around 10 days to complete the process.

Edano said due to the falling level of cooling water, hydrogen was generated and that leaked to the space between the building and the container and the explosion happened when the hydrogen mixed with oxygen there.

One of the ongoing concerns is that the lack of water to act as a coolant allowed temperatures and pressure to rise. What water was available was turned to steam or broken down into oxygen and hydrogen, which could spark and set off an explosion - and that appears to be what happened.

Expect that future plant designs will incorporate the lessons learned from the Fukushima plant disaster. That will include more robust backup systems that allow the plant to shut down in an orderly and safe fashion.

UPDATE:
The death toll continues rising, and is currently ranging from 1,300 to 1,700. Most of those killed were from the effects of the massive tsunamis that roared ashore and swept several miles inland overtaking everything in its path and reducing the countryside to a jumbled mess of rubble and debris. Entire towns are still unaccounted for and communications remains troublesome.
Posted by lawhawk at 3/12/2011 07:25:00 AM