The Rebuilding of Ground Zero, Part 122

Electricians had taken it upon themselves to deck out the Freedom Tower (1WTC) with festive lights for the holiday season. They not only ran Christmas lights, but they set up several floors with blue and gold lights for Chanukah. 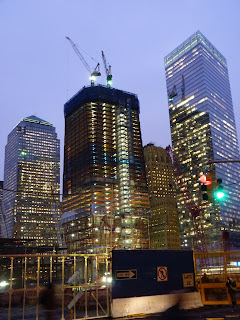 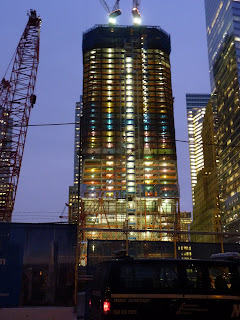 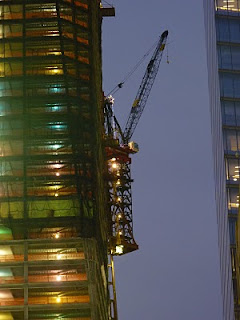 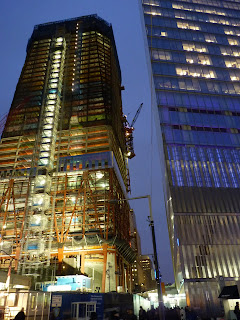 The last two photos show a feature of construction that one often will not find on construction jobs. The Freedom Tower has three tower cranes, with two in their familiar location at the highest locations on the rising superstructure. This third crane appears to hang precariously from the side of the tower and its sole function is to hoist concrete to complete floors and for building out the core of the tower. This crane hoists itself along the side of the tower and is a technological marvel on its own and was necessitated because of the tight construction perimeter around the building.

Meanwhile, the former Deutsche Bank buildng is nearly gone. The doomed building is nearing end of the oft-delayed deconstruction process and is no longer a malovalent hulk looming over Ground Zero. At long last the last of the damaged building surrounding Ground Zero have been removed and from here on out, rebuilding is fully the name of the game.

One would hope that in the spirit of the season that the Port Authority would finally make a deal with St. Nicholas Greek Orthodox Church so that the congregation can begin its own rebuilding, but that process remains mired in stony silence. The congregation's church was destroyed by the collapsing South Tower and rebuilding was not possible while the former Deutsche Bank building deconstruction was ongoing because the site was needed for staging equipment.