The Rebuilding of Ground Zero, Part 120

The former Deutsche Bank building demolition is nearly complete, as just the last three stories above street level remain. It should be completely demolished by the end of the year, which means that construction of the new vehicle security center will not be far behind. Security concerns continue to dog aspects of the project, as there are renewed calls to eliminate underground public parking because of concerns over car bombs, and the Freedom Tower was designed (and redesigned) to deal with possible car bomb and aircraft terror threats. Some have argued that the Freedom Tower's base speaks to the fear factor because of the thick reinforced concrete curtain walls designed to absorb and deflect potential bomb blasts away from the core.

The LMDC has approved funding for a new pedestrian just below Ground Zero linking Battery Park City with the Financial District. That project has been held up for a couple of years over obtaining financing and design objections.

Meanwhile, reports indicate that access to the 9/11 memorial and museum will be limited after it opens next year because of space and safety considerations. Free tickets are likely to be issued to those wishing to enter onto the grounds of the museum/memorial and the number of tickets will be limited because of the limited egress/access to the location because of the ongoing construction for the Freedom Tower and PATH terminal. That's problematic for families of victims who would want to enter the site to pay their respects to their loved ones, but for now, there's no indication that a fee will be charged. The site should remain free to all. Here's photos of some of the many items that are likely to be put on display - thousands more will remain in storage for want of space.

Yet, there's a plan being floated by the NYPD that would further limit access throughout Ground Zero in the name of security. That's sure to rankle those who want unfettered access to the museum, museum, and those who will be working at the office towers ringing the site.

Parts from the collapsed Twin Towers continue to be distributed to museums and memorials across the country, including to Baltimore, Maryland.

The LMDC is also likely to consider a request for $5 million from the Cordoba House/Park51 developers to help get that project off the ground. Considering that the LMDC mission was to spur development and reduce blight in Lower Manhattan following the attacks, the request fits the goals and objectives. Mind you that this wont stop the naysayers from making all manner of claims about how Park51 developers are taking 9/11 funds (the money isn't coming out of the 9/11 Victims Compensation Fund but from funds set aside by the federal and state governments to assist Lower Manhattan redevelopment).

The Freedom Tower (1WTC) construction continues at the ongoing pace of about 30 feet a week, and that's accompanied by ongoing concrete, fireproofing, and now by the installation of the exterior wall and window structures. The windows are being installed from the 20th floor level upwards and have nearly wrapped around the entire 20th floor in alternating segments. PPG Industries is manufacturing the glass used in the tower.

You can see the newly installed windows in the upper right corner of this overview of Ground Zero, along with the north memorial pool undergoing testing while construction of the above ground portion of the museum continues in the middle: 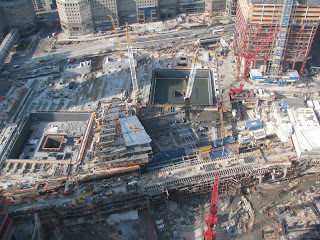 One interesting aspect of the construction is that there are now three tower cranes operating in the erection of the Freedom Tower. Two tower cranes are dedicated to erecting the steel components, while a third tower crane literally hangs off the side of the building in order to deliver concrete to the construction of the core and floors. The side crane hangs off the northwest side of the building at Vesey and West Street and will rise as the concrete core and floors are poured.

For a good look at how far Ground Zero has come since the attacks, here's a video showing the stark differences:

Meanwhile, the 9/11 responders have agreed to accept the $712 million settlement with New York City and other defendants. It's a drop in the bucket for compensating those who have been injured or suffered health effects, but can provide some relief for those who are dealing with illnesses that are linked with service at Ground Zero.
Posted by lawhawk at 11/24/2010 02:20:00 PM