The Rebuilding of Ground Zero, Part 115

The New York Times is back at its old tricks. It's back to questioning the need to build the Freedom Tower, and this time it's focusing on the cost, which is expected to be $3.3 billion.

The author asserts that the cost to maintain the class A space would make the space prohibitive, but that runs counter to the general belief that environmentally responsible building is more efficient and cost-effective in the long run.

Delays in building drove up the cost - and the New York Times has repeatedly questioned the need to rebuild the office space at Ground Zero, even though the Times itself is a real estate company that attempts to sell newspapers with mixed results. The Freedom Tower, which is now one of the hottest properties for prospective companies, would compete directly with the Times' headquarters building in Midtown and would compare favorably to the Times headquarters.

Of course, the Port Authority disagrees with the Times' analysis:


Not surprisingly, the Port Authority disagrees with my analysis. It points to the fact that it has close to $1 billion in insurance proceeds that it is using to defray the cost of the building. And it says its break-even number is much lower than $130 a square foot.

“It is not going to get a typical developer’s rate of return,” conceded Rich Gladstone, the Port Authority’s point man on the project. “But it will be cash-flow positive.” He insisted that the commuters who pay their $8 a day to cross the George Washington Bridge would never have to support 1 World Trade Center. Of course that’s easy to say now, with the building still two years away from completion.

Still, the Port Authority made another recent move intended to ensure the success of the building. It sold a small piece of the equity in 1 World Trade Center — around 5 percent — to the Durst Organization, for a reported $100 million. It is a great deal for Durst, one of the biggest and savviest commercial developers in New York. (It built the Bank of America Tower, for instance.) Its investment values the building at $2 billion, far less than it cost to build, so if it rises in value, Durst gets the upside. And in return for its $100 million, Durst gets to manage the building for the Port Authority, an arrangement that will allow it to reap fees for everything from finding tenants to reconfiguring office space. It is also a deal filled with a certain, undeniable irony, which has not been lost on anybody in New York real estate circles.

You see, Douglas Durst, the company’s 65-year-old patriarch, has been one of the few people willing to criticize 1 World Trade Center on the record. When the Port Authority was negotiating with those government agencies back in 2006, Mr. Durst told The New York Times that saddling “already overburdened taxpayers of New York with the rent necessary to pay for it makes no sense at all.” He even took out advertisements opposing the project.

Durst criticized the deal, because he was offering his own projects around the city with similar floor plates and class space. Now, he's got a role in a huge project with tremendous upside.

The irony isn't that Durst is involved; it's that there were other real estate organizations that were more than willing to bash the project privately and publicly that had no problem bidding for the management rights to go where the Port Authority didn't want Silverstein Properties. Durst also notes that he opposed Times Square development, before he became integral in the office tower boom around Times Square.

Will the Freedom Tower become profitable for the Port Authority at some point? Yes. Can anyone say with certainty when that will happen? Nope. It depends on a whole boatload of factors, not the least of which is making sure that the rest of Ground Zero is rebuilt so that the area doesn't feel like a perpetual construction zone.

Meanwhile, construction continues all around Ground Zero, and the the 9/11 museum continues to be built around major components recovered from the World Trade Center, including a pair of tridents that used to hold up the exterior of the towers. 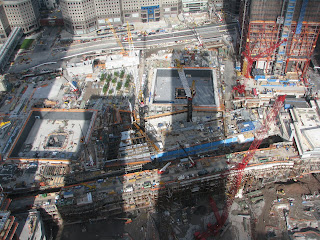 You can make out the tridents near the left tower crane in the middle of the construction site - between the two memorial reflecting pools. They are edgewise to the camera, but they are distinguished because they are covered in a white protective film
Posted by lawhawk at 9/18/2010 09:45:00 AM