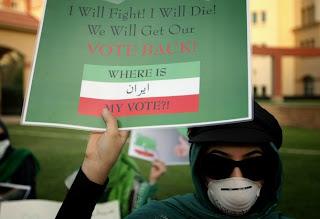 Iran's election officials have said there will be a recount of the ballots.

Moussavi also asked supporters not to attend a planned protest rally Tuesday to avoid clashes with a rival rally by Ahmadinejad's supporters that had threatened to renew post-election violence, the official said.

Thousands of Ahmadinejad supporters crowded the streets of Tehran Tuesday.

Iran's Guardian Council -- which is made up of top clerics and judges -- said Tuesday it will recount votes that the opposition questioned in Friday's race.

A spokesman for the council told the official Islamic Republic News Agency that council members met with the three opposition candidates -- Moussavi, Mehdi Karrubi and Mohsen Rezaie -- and asked them to specify the areas where they wanted a recount.

Some would argue that this would be the first time that the ballots are being counted in Iran from this past week's elections, but it goes to show just how crippled the mullahs grip has become.

Mousavi doesn't want to let a bogus election get rubber stamped with a recount, so he's calling for fresh elections. Don't hold your breath on that one.

Supreme Ayatollah Ali Khamenei had previously stated that Mahmoud Ahmadinejad won the elections, and usually that was the final word on such things.

Something new and different is afoot in Iran, and no one quite knows for sure what will come of it. There's no telling whether it is good or bad. It's just a different dynamic coming into play.

Meanwhile, Bush hatred continues creeping into coverage and punditry regarding the Iranian elections. One nitwit compares the Iranian elections to the US elections in 2000. Sorry, but there is no comparison between a closely contested election in Florida that came down to a couple hundred votes and how to make sure that the votes were counted to Iran's mullahs rigged an election, predetermined an outcome, and rioting ensued across the nation, while Ahmadinejad used his supposedly loyal army, the IRGC, to intimidate, threaten, and arrest opposition leaders. None of that happened in the US in 2000, and to make such claims is spurious at best.

It turns out that the IRGC may not be as loyal as Ahmadinejad thought, and the idea of Iranian armies firing on fellow Iranians may have been a determining factor in choosing to recount the ballots. Michael Ledeen notes that it perhaps that explains why Ahmadinejad appears to have imported Hizbullah from Lebanon and Basji (the paramilitary aligned with the IRGC) to act as his enforcers. He further notes:

What’s going to happen?, you ask. Nobody knows, even the major actors. The regime has the guns, and the opposition has the numbers. The question is whether the numbers can be successfully organized into a disciplined force that demands the downfall of the regime. Yes, I know that there have been calls for a new election, or a runoff between Mousavi and Ahmadinezhad. But I don’t think that’s very likely now. The tens of millions of Iranians whose pent-up rage has driven them to risk life and limb against their oppressors are not likely to settle for a mere change in personnel at this point. And the mullahs surely know that if they lose, many of them will face a very nasty and very brief future.

If the disciplined force comes into being, the regime will fall. If not, the regime will survive. Can Mousavi lead such a force? If anyone had said, even a few days ago, that Mousavi would lead a nation-wide insurrection, he’d have been laughed out of the room. Very few foresaw anything like the current situation, although I will claim credit for predicting that neither side in the electoral circus would accept the official verdict.

Does Mousavi even want to change the system? I think he does, and in any event, I think that’s the wrong question. He is not a revolutionary leader, he is a leader who has been made into a revolutionary by a movement that grew up around him. The real revolutionary is his wife, Zahra Rahnavard. And the real question, the key question in all of this, is: why did Supreme Leader Ali Khamenei permit her to become such a charismatic figure? How could he have made such a colossal blunder? It should have been obvious that the very existence of such a woman threatened the dark heart of the Islamic Republic, based as it is on the disgusting misogyny of its founder, the Ayatollah Khomeini.

I don't think Mousavi wants to change the system, given that he was a long time part of the regime, and was one of the leading voices to initiate Iran's nuclear program. That's not going to change with him in charge.

Still, Ledeen notes that no one knows where any of this will lead, including the mullahs, Ahmadinejad, or Mousavi. We can surmise the intentions of the various actors because self preservation and retention of power play a great role in this; Ahmadinejad and the mullahs both want to retain their power and grip.

UPDATE:
Despite claiming that they will recount the ballots, the regime is doing all it can to limit communications, including via Twitter and other news sources. They must hope that limiting communications will undermine the opposition to Ahmadinejad and allow him to reassert a firm grip. See here and here for more. The regime is also doing all it can to limit foreign news outlets from reporting on the situation inside the country.

People are using all kinds of technological means to evade the state's censorship and shuttering of Internet sites that enable communication and organization.

Video of thugs shooting on crowds from buildings yesterday.

UPDATE:
No one knows how many people were killed in the ongoing demonstrations, but it is likely far higher than 20 (the Guardian claims 12 killed). If the videos coming out of Iran are any indication, hundreds of people have been injured in running clashes with the Basji and thugs loyal to Ahmadinejad.

1. Dismissal of Khamenei for not being a fair leader
2. Dismissal of Ahmadinejad for his illegal acts
3. Temporary appointment of Ayatollah Montazeri as the Supreme Leader
4. Recognition of Mousavi as the President
5. Forming the Cabinet by Mousavi to prepare for revising the Constitution
6. Unconditional and immediate release of all political prisoners
7. Dissolution of all organs of repression, public or secret

(Via Michael Totten at Commentary)

UPDATE:
Make that a partial recount of the ballots.

That shouldn't sit well with Mousavi's supporters, or Mousavi, who was calling for fresh elections altogether.

Also, Ahmadinejad must feel pretty secure in his position as he's taken off for a scheduled trip to Russia. He must feel that he wont have any problem returning.

UPDATE:
Another idiotic comparison of the day, this time courtesy of Matt Yglasias. He's busy trying to compare Ahmadinejad to Sarah Palin. Yeah, what could those two possibly have in common?

Ahmadinejad is in most ways a classic right-winger, a demagogic nationalist and cultural conservative. In a manner somewhat reminiscent of a Sarah Palin, however, he clothes this right-wing politics in a language of class resentment, painting his more pragmatic and reformist opponents as decadent elites out of touch with ordinary people. Unlike the populists of the American right, however, he merges this rhetoric with something resembling an actual populist economic agenda. The main element has been the use of oil revenue to expand the state sector of the economy in an attempt to distribute wealth more broadly throughout the country. This approach has gained Ahmadinejad a loyal following among the rural poor and public employees, but Iran’s objective economic performance has been disappointing, even during the great oil boom years.

Yet another lefty ignoring Ahmadinejad's genocidal rhetoric and trying to link Ahmadinejad to prominent GOPers. Lovely. It's cognitive dissonance, and it ignores the true evil at work in Iran, courtesy of Ahmadinejad and the mullahs.

UPDATE:
This is a good take on what President Obama should have said.

UPDATE:
It shouldn't surprise anyone that the regime's attempt to quell the demonstrations with a claim that they would conduct a recount hasn't done its job. People don't trust the government, and they've got every reason to do so.

UPDATE:
I've repeatedly pointed out that the mullahs control who gets on the ballots and that until this election, there hadn't been questions about the outcome, let alone the legitimacy of the regime. This election throws the entire power structure in doubt, and with people understanding that their votes are meaningless aren't going to sit back and let their say slip away, even if it was ethereal to begin with.

They got a taste of what democracy is with those elections, and they're not about to let Ahmadinejad steal if from them. It's a new dynamic, although that doesn't mean that Iran will become a Western style democracy overnight. We're not at that point yet. These events have shaken the Iranian polity to its core, and there will be changes.

There will also be blood, as Ahmadinejad and the mullahs aren't going to go quietly into the night.

UPDATE:
Soccer Dad notes the stinking hypocrisy of the Obama Administration, which has taken a tougher line with the Israeli government than it has with the mullahs. He points to Bret Stephens, who writes:

On the one hand we have democratically elected Israeli Prime Minister Benjamin Netanyahu, reputed hardliner, who on Sunday abandoned his own long-held position and, to the immense disappointment of much of his political base, spoke of his willingness to accept a Palestinian state -- provided only that the Palestinians forswear military pursuits, resettle Palestinian refugees in their own territory, and recognize Israel as a Jewish state, just as the U.N. did at the country's founding.

On the other hand there's Iranian President Mahmoud Ahmadinejad, Holocaust-denier and nuclear aspirant, who on Friday was declared the winner of an election so transparently rigged that the only serious question is whether the regime even bothered to stuff the ballot boxes. Since then, scores of reformist politicians have been arrested or intimidated, rallies have been banned, and the possibility of an Iranian Tiananmen hangs in the air.

Question: Toward which of these two leaders does President Obama intend to play the heavy?

Obama continues applying pressure on the duly elected Prime Minister of Israel, while going out of his way to appear to do any such thing to the illegitimate regime in Tehran. That's quite telling.

UPDATE:
Murder in the Isfahan dorms. Allahpundit also points out the following:

Incidentally, if you haven’t been following Jim Geraghty today, go see how much fun he’s having digging up old (and not so old) quotes from idiot liberals about how “shrewd” the regime is and what a “sweet hipster style” Ahmadinejad has. (Actually, argues E.M. Zanotti, he practically is a hipster.) In fact, if not for his Holocaust denial, he would have been much more popular as an icon of revolutionary chic. I know it plays well in the region, but so nutty is it and so quintessentially the hallmark of an anti-semite that even leftists otherwise inclined to spin for Iran could never really embrace him, even though he’s become the face of anti-Americanism abroad. For most Bush-haters — but not for all — it was simply too much, sweet hipster style notwithstanding. Anyway, here’s some of the hipster’s handiwork. Brace yourself. Click the image to watch.

It really is interesting watching leftists engage in pretzel logic after supporting Ahmadinejad's asinine claims for years on end, but now suddenly find themselves opposing him because he's suddenly the thug that the rest of us knew him to be.
Posted by lawhawk at 6/16/2009 09:20:00 AM