Hoboken SWATted by Hooters Encounter of the Worst Kind

A video showing a high-ranking Hoboken police officer cavorting with waitresses from a Hooters restaurant in Alabama has become part of a discrimination lawsuit filed by five Latino officers, and Thursday led the city's mayor to announce the creation of a new civilian public safety director to oversee the police department.

The first order Hoboken's new public safety director issued after being sworn in today was to dissolve the Police Department's SWAT team, after photos surfaced of some of its members cavorting with Hooters waitresses and allowing them to hold their weapons during a Hurricane Katrina relief mission in 2006. 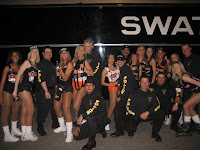 "The unit itself has been disbanded permanently," said the public safety director, Bill Bergin.

He added that while the SWAT team is dissolved, its members will continue their normal duties.

Bergin said his second order was to call the SWAT team commander Lt. Angelo Andriani -- who was featured prominently in the racy photos and who was also seen in photos wearing a napkin over his head meant to look like a Ku Klux Klan hood -- back from vacation and to assign him to desk duty.

Andriani is the subject of a federal lawsuit by five Latino cops accusing him of being an "unabashed white supremacist."

There may be more disciplinary measures coming, said Bergin, 68, a 31-year veteran of the Hoboken Fire Department who retired at the rank of deputy chief and will oversee both the police and fire departments in his new role.

So, will this affect the public safety for residents of Hoboken who might rely on the SWAT team for protection in certain situations? 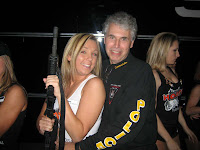 As for the disciplinary measures against individual officers, including Andriani, those appear to be appropriate given the circumstances. The conduct of the group was unprofessional, and Andriani's own actions were reprehensible and open the City to liability.

This post will also serve as my call for the best and brightest from around the Internet.