The New York Times had a spread today relating to the deconstruction of the Deutsche Bank Building at 130 Liberty.

So, day after day this summer, workers with acetylene torches are going floor by floor, slicing through the steel beams, the horizontal parts of the building’s skeleton. With help from small tractorlike machines, they are pulling down the beams and the steel columns they are attached to.

Then they are cutting the beams and columns into smaller pieces and loading them into trash-hauling bins that a crane lowers to the street.

Working their way down from the top of what was once a 41-story building, the workers reached the 26th floor on Tuesday morning.

They were cutting into the beams at the southwest corner of that floor, and the two-and-a-half-inch-thick concrete floor slab was vibrating. That was because a mechanical excavator — another tractorlike machine, with a jackhammer mounted on a movable front arm — was breaking through the slab on the southeast corner.

The broken pieces went into another trash-hauling bin and the crane took them away, too. The workers can dismantle one floor every four days or so.

A separate team is working its way through the building, removing the interiors and scrubbing away any contaminants that may remain.

Consultants to the development corporation said more than two years ago that besides asbestos, the building had excessive levels of seven hazardous substances, including dioxin, lead and chromium.

Now those floors have been reduced to their structural elements: naked columns and beams. The walls that once defined offices are gone. So are the plate-glass windows that once looked out on the trade center across the street. So are the wires that connected computers and phones and brought in electricity.

And there was the continuing search for human remains. The chief medical examiner’s office said in February that 766 body parts had been found in the building. Most were fragments of bone less than four inches long.

The long-delayed project got under way in earnest in February. A large construction company, Bovis Lend Lease, won a contract worth $82 million to clear the site, and before that, there was a court fight between Deutsche Bank and its insurers that ended after former Senator George J. Mitchell was called in as a mediator.

The solution was for the development corporation, which is controlled jointly by the state and the city, to buy the building for $90 million.

The federal Environmental Protection Agency approved the plan for dismantling the building last September after reviewing methods for keeping contaminants from being released into the air during the deconstruction.

In that spirit, here are some more photos, which help relate the location and scope of the project. 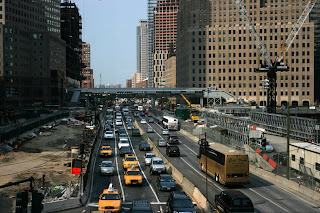 This is another angle of the view looking North across Ground Zero. You can see the gleaming facade of 7WTC and the scale of the construction along the Northern edge of Ground Zero, including the Freedom Tower, transit hub, and memorial sites. The large structure across the lower right quadrant is part of the PATH temporary terminal. 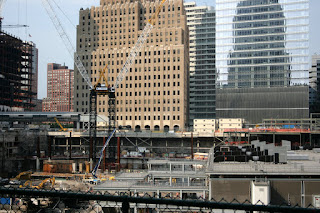 This is a view of the Ground Zero firehouse. There's a bronze plaque along the side of the building, honoring the supreme sacrifice made by 343 firefighters, and many tourists stop to ponder what happened here. The firehouse was rebuilt because it was completely crushed under the collapsing towers. The final picture in this series shows the damage to the facade of the building next door. 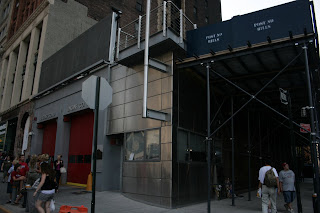 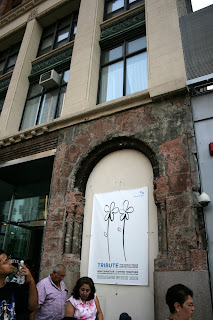